Students turn their back on Kyoto walkout 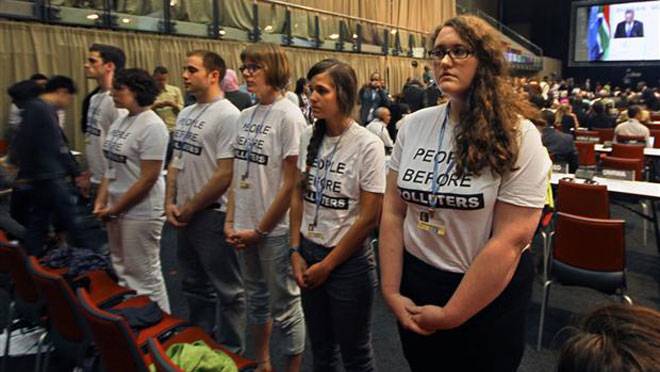 “We stood up and turned our back on Canada, like Canada has turned its back on its people,” says fifth-year IDS student James Hutt, speaking from Durban over Skype Dec. 11, his voice rising above the din of passing motorbikes. “They put polluters before people.”

“It was scary at first to get up and turn around like that, especially at the UN, but when we did, we just saw tons of support build up around us, we got a standing ovation— we actually got more applause than Peter Kent.”

The six protesters, including fellow Dal student Sonia Grant, traveled to Africa on their own dime with 12 other Canadian Youth Delegates (an environmental collective that dispatches youth to climate conferences). Hutt says Canada is not speaking on behalf of its population, “but is speaking for one of the dirtiest processes on the planet: tar sands oil extraction.”

In his address, Kent stressed the importance of including emerging economies, like India and China, in any binding, international carbon-reduction agreement. “Kyoto covers less than 30 per cent of global greenhouse gas emissions,” he writes in an op-ed piece Dec. 9, claiming the Canadian government aims “to balance the need for a cleaner, healthier environment with the need to protect jobs and our economy.”

Kent says climate action talks in Cancun last year were far more comprehensive than Kyoto, though no binding terms were reached at those talks.

The conference in Durban, running two days overtime, ended Dec. 11 with a deferral to meet in 2015 with ostensible plans to reduce emissions and share sustainable technology with developing nations.

CYD write on their website “they are celebrating the creation of a deal to find a deal at some point in the future while emissions rise and the planet cooks.”

Though Canada’s stance on Kyoto remains controversial, Hutt marvels at the lack of negative feedback and student critiques at the protest.

“The government subsidizes the tar sands to the tune of 1.4 billion annually… what we are arguing is to stop the subsidies and stop lobbying on behalf of tar sands and big oil; start using that money and that funding to transition a green and just economy; start investing in renewable energy and providing jobs.”

Back in Nova Scotia, Hutt has worked with other students on a movement called Buy Back the Future. “The oil industry effectively bought our future,” he says. He encourages young people to buy it back by going through the channels that exist, talking to elected officials and writing letters. Hutt hopes his actions will inspire “direct creative action, it’s where this movement needs to go.”

Andrew Mills was Arts Editor of the Gazette for Volume 145.