To the surprise of candidates, agricultural students suddenly participating in DSU elections

Over 900 new potential voters announced near end of campaigning period

Dylan Ryan, Chief Returning Officer of the Elections Committee handling this year’s Dalhousie Student Union elections, confirms the committee has received complaints from students regarding a surprise announcement made to candidates on Thursday that students on Dalhousie’s Agricultural Campus are able to vote this year.

Since the Nova Scotia Agricultural College merged with Dalhousie to become Dal’s Agricultural Campus in 2012, agriculture students have only paid membership fees to the Dalhousie Agricultural Students’ Association (DASA) while DASA remains a faculty society under the DSU.

Ryan says he was made aware that agricultural students would be able to vote in this election through an email sent to him by Ramz Aziz, DSU President, on the night of Wednesday, March 18.

Ryan says he first saw the email on Thursday, March 19 and then emailed all elections candidates to share the news. The period where candidates were able to campaign ended at 8 p.m. on Friday, March 20.

A comment thread on a Facebook post made by Aaron Beale, member-at-large on DSU council, shows Aziz announcing this change was in progress on Tuesday, March 17.

This thread appears to show some elections candidates reacting to this news for the first time on March 17, two days before they received a formal confirmation from Ryan that this was the case. 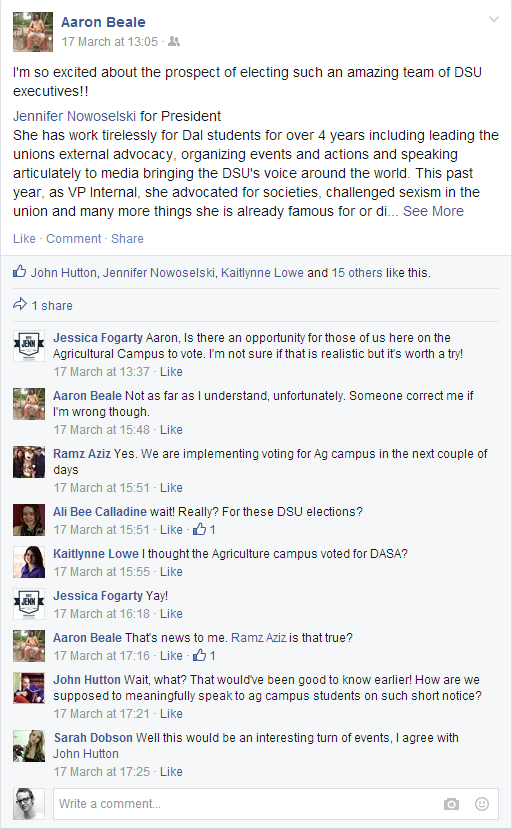 Agricultural students should have been able to nominate themselves, too

Ryan says this change was made as a result of DASA recently trying to pass a vote through their council.

While the vote was being discussed, procedural questions were brought up that led to an investigation that resulted in the DSU concluding that DASA is not an autonomous society, but that they are under the DSU. Therefore, they have the right to participate in DSU elections.

Ryan confirms that if this decision had been made prior to the election’s nominations period, agricultural students would have been able to nominate themselves for positions.

“They’ve said that this is the way it is meant to happen, so that’s how it’s going to go down,” says Ryan.

Dalhousie’s 2013/14 Enrolment Statistics show 974 students were enrolled in the Faculty of Agriculture of December 1, 2013, while there was a total of 18,440 Dal students.