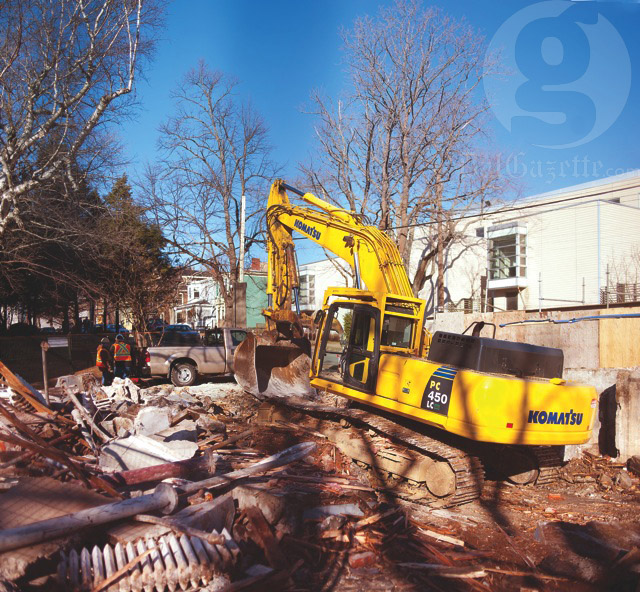 Construction at Dal is a real hassle. Photo by Angela Gzowski

From the classroom to my residence, campus is ravaged with construction. A large backhoe swings beside the Killam Library and “crosswalk closed” signs are hard to miss when rushing around on campus. The diversions around machinery and shortcuts across the lawns have become like stages of an obstacle course. All of these commotion-creating and emission-generating improvements are quickly becoming the norm at Dal.

With the amount we pay for tuition, campus improvements should be expected. So, I’m not about to complain about upgrades being made (I don’t want to go to school in a place that is falling down around me), but maybe this isn’t the best timing for renovations.

I have early morning and late night classes almost every day of the week, so when I get a chance to sleep in it’s a dream come true. However, last fall it felt more like a nightmare. Every time I got a day to rest up, nail guns, cracking concrete and construction workers could be heard composing an ear-burning symphony outside my window.

After deciding that sleep was out of the question, I would sometimes walk to Second Cup in the Killam Library for a cup of my favourite tea. But they too were under renovations, so my tea had to wait.

As I continued through the library I noticed that a Subway was being built where an attractive study area once stood.

This was not a good start to my day.

Reconstructing Second Cup to look almost exactly like it did before and putting up a Subway when there is one five minutes down the road is not beneficial for students. The money we pay towards our education should go to more significant advancements that will be worthwhile for university students. Erecting a Subway in the library (where I have to wait 30 minutes to get a six-inch sub) is not worth it. Building a new residence to house Dal’s growing population is, but sometimes these necessary refurbishments infringe upon student welfare.

This year all of the washing machines have been replaced in my residence. The new washers are an improvement, but it’s a huge inconvenience when your clothes hamper is overflowing and the washers are missing in action.

The fire drills were completed at the beginning of the year, but since then the smoke alarm in my room has sounded numerous times due to unplanned maintenance checks. (It has become frequent enough that I no longer pay attention to it and instead patiently wait for the high-pitched beeping to stop).

Last year I came back from class to find the door to my room was being painted. It looked phenomenal, but I kept forgetting that it was freshly coated and preceded to decorate myself in splotches of pink paint for the rest of the day.

The lack of privacy is also disconcerting. I’ve received a number of emails this year confirming that maintenance staff members have permission to enter my room to check lights and detectors at any time on specified dates.

From past experience I’ve found that the small renovations in my living space are more of a burden than the larger projects going on outside. These tasks have a negative impact on studying and the learning environments at Dal. Loud maintenance workers talking in the hallway and sounding alarms have much more of an influence on my ability to concentrate than the distant revving of heavy equipment.

So while campus construction is inevitable, facelift tasks should occur during the summer break when students aren’t dodging pylons to get to class. Student comfort and privacy shouldn’t be compromised any time of the year, and we should be asked to give more input in deciding what kind of improvements Dal should make next.