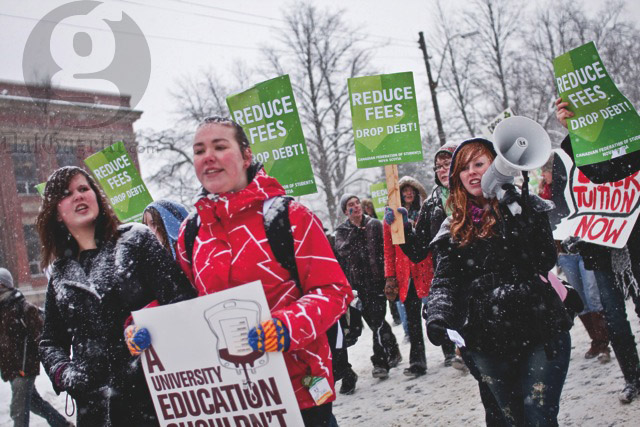 “All out Feb 1,” say signs and pamphlets across campus. “Reduce tuition fees!” say pins and stickers on busy students passing by.

Students across the country have been working hard to organize actions in demand of progress on student issues. Students at Dal have been organizing against the recent government cuts to university funding, deregulation of tuition fees, declining quality of education, increase in corporate control and undemocratic university practices.

These issues and the response from students are not unique. This assault on public universities is part of the broader trend of austerity seen around the world. Action is the accepted and practiced response. But while students organize teach-ins and rallies, doing class talks, handing out pamphlets and making art, where is the Dalhousie Student Union (DSU) at such a critical time?

While students are getting screwed and a global movement is underway, our “union” continues to be known as the building on campus where everyone buys shitty food. Most people don’t even know what the DSU does, and if they do know, they don’t think of it as the body representing the best interest of students. Our union has failed at engaging with us in any meaningful way, just as it has failed in representing us against the politicians saddling us with debt.

What can the DSU learn from the self-organizing of Dal students? Student action works! It scares our politicians into respecting our rights and provides an empowering and engaging avenue for the expression of student’s grievances.

According to Valentina Latorre, a Chilean student organizer involved in the massive mobilizations in Chile last spring and summer, “We have to stand together with students from around the world.” Latorre was flown in to the city to speak at a Halifax-wide teach-in and inspire students to take action. Her speech is truly inspiring.

“Around the world people are waking up. People are fighting against what they think is unfair,” she says.

A day of action in Chile brought 2 million people to the streets. Canadian students want to do the same.

Gabe Hoogers, the president of the Kings Student Union (KSU), introduced the teach-in by tracing the history of student action from the 1990s. He acknowledges, one after another, student action results in policy changes.

“This is all to say that we can make a difference,” Hoogers says. “We are not alone in this.”

When asked about the role of the KSU on these issues, he said: “Lobbying is important, but on the other hand activism is an important part of lobbying itself. We’re reaching out to students and making sure that they have all the information that is necessary to combat what it going on.”

Micheal Walsh is the VP (external) at Memorial University in Newfoundland, where students pay just $2,550 per year.

“It is important to use a diversity of tactics,” he says, as he tells me about the history of student action and the Day of Action he is organizing.

Nova Scotia students already pay some of the highest fees in the country. Now the government is cutting funding and deregulating tuition fees. Dal’s administration is complicit with this, raising our tuition fees and continuing to waste money on development projects and promotion. They don’t have the debt, nor do they receive the education. Our university president has a salary bigger than Canada’s prime minister at $ 393,264.

How do students deal with this? When our professors are being screwed over, they go to the faculty union that represents them and their interests. But where is the DSU in all of this? While filled by caring, hard working people, the DSU is left standing alone with regressive tactics. Students are left unrepresented and unengaged. Their hiring of a city lobbyist implies a good attempt at tackling student issues, but it is missing a crucial point. Dal doesn’t need more politicians; Dal students need a union to represent our interests and help us support ourselves in the process.

On Feb. 1 masses of students will rally with music, puppets, placards, chants and high spirits. The Day of Action in Halifax will consist of speakers, spoken word, information proliferation and critical discussions.

Last year’s rally drew over 2000 students and community members through a snow storm and was the largest rally Halifax had seen in 10 years. This year, organizers want to do the same.

When I asked Latorre what message she wanted to send to Dal students, she said: “That you stand and fight. Look all around the world and you see that students are taking control of what really matters.”

My guess is that on Feb 1. students will be out on mass, but that the DSU will continue to be thought of as just a building.

Feeder rallies are scheduled for King’s College at 11:30 a.m., Dal (in front of the Killam Library) at 12 p.m., and Victoria Park at 1 p.m., followed by a march to NSCAD after that.