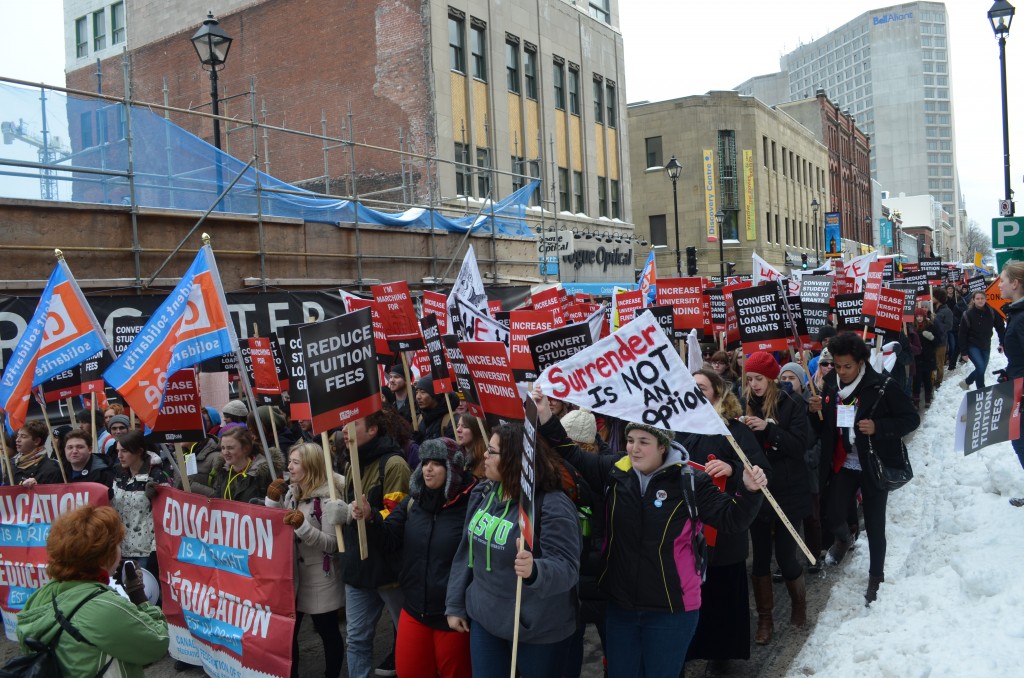 Students marching at the Feb. 4 Day of Action. (Photo by Mat Wilush)

I choked on my coffee when I read Dijay Savory’s piece Student protests are useless in the Gazette earlier this month. While I respect Savory’s right to an opinion, I’m sad to note that his analysis of student movements and of Quebec politics is flawed at best.

Before I tackle his apathetic tirade, however, I’d like to debunk some of the misinformation that was published about the student movement in Quebec. Here it goes:

“In Quebec during the 2012 protests, students ended up rioting, getting arrested, and driving the government to adopt controversial anti-protest laws that limited freedoms.”

Nobody drove the government to adopt an anti-constitutional law banning protesting and picketing. Bill 78 was criticized by the human rights commission and the Bar of Quebec. The Quebec government used it as a tool of oppression to try to curb the movement.

Students didn’t riot. The vast majority of protests were peaceful. Students took the streets every single day for months at end – but that gets boring to report on after a while. The media largely exaggerated the violence and vandalism that occurred. Unfortunately, what Savory’s piece failed to point out is the police brutality that students and their allies endured for months at end.

That year, one of my friends was brutally arrested and beaten for watching a protest from his porch. Another time, a smoke grenade exploded on someone’s face right in front of me. All I could do was quickly pour my water bottle on his bloody face, because the riot police were charging us from behind. Another friend was pepper sprayed for participating in a peaceful sit-in.

Bottom line, police arrested thousands (!) of students, but most of the students were never charged because the courts later recognized that these arrests were uncalled for.

“They lost sight of their goals under crowd influence, and the protests only seemed to harden the Liberal government’s attitude and willingness to negotiate.”

The Liberals were never willing to negotiate – that’s why we took the streets in the first place.

Lose sight of our goals? We achieve the freeze. We forced the government to hold elections, which they lost. We popularized the debate and inspired a collective movement of civil disobedience. Heck, every single day at 8 p.m., students and allies alike walked out on their porch and the city vibrated to their symphony of casseroles. ‘Nuff said.

“It would be wrong to suggest that this electoral victory was a result of the protests.”

The student movement in Quebec is also a fight against austerity. Before the student protests of 2012 began, corruption and collusion within the Liberal government was being exposed by the Commission Charbonneau. Their handling of student protests only heightened public outrage. Bill 78 hammed the nail in their coffin by making the Liberal’s oppressive tactics visible to a greater number of people.

Ultimately, Savory’s analysis reminds me of the baffling distinction between Anglophone and Francophone coverage of the 2012 protests. The Anglophone press vehemently opposed the movement, and sought every chance to discredit protesters. Just like in Savory’s piece, the word “mob” was thrown around a lot. Perhaps that is part of the broader construction of a Canadian, white, middle class, Anglophone, “nice,” majority, contrasted with its Others – indigenous, immigrant, racialized … and québécois/e.

Nova Scotian students have much to learn from their Quebecois counterparts. What’s hard is that the student movement in Quebec is far better organized – students have been mobilizing in the province since the 1950s. Quebec student unions have the ability to mobilize a large amount of students, influence strike votes, and sway political and social action in other spheres of society.

Quebec student unions are organised down to the faculty level, but here in Nova Scotia our faculties normally don’t engage in political work – they mostly plan parties and conferences. Unlike in Quebec, our faculties don’t feel like it is their place to vote for strikes, they’d rather defer that decision to a student union council. That needs to change.

The Day of Action had great effects. Student leaders got meetings with provincial finance minister Diana Whalen and advanced labour and education minister Kelly Regan, who have refused to meet with students for longer than 5 minutes all year. We got the front page of the Chronicle Herald – which is worth about $8,000 – not to mention the coverage from in-studio TV interviews. Thousands of students are engaged and better informed as a result.

Student activists face apathy and cynicism, but they’ve managed to prove their detractors wrong for decades. Writing letters, as Savory suggests, is great – but direct action is what has been proven to work in Quebec, Chile and Argentina, to name a few.

Solidarity is what we strive for and it’s what leads to success. Now, it’d be great if our student publications could get on board with that.

Natasha MacDonald-Dupuis helped organize the Feb. 4, 2015 Day of Action and was involved in Quebec’s student movement.