25 years down and plenty to go

“Puck drop is at 7:02 p.m.” Bruce Hartlin says in the Halifax Forum’s time keeper’s box at the start of an AUS men’s hockey game between the Dalhousie University Tigers and the University of New Brunswick Varsity Reds on January 12.

Hartlin didn’t check the time when he said it, but he was right.

After 25 years of working Dal hockey games and seven with Saint Mary’s, Hartlin knows exactly when puck drop is.

For Hartlin, his game time starts around 5:15 p.m. He’s in charge of time keeping, public address announcing, the in-game music, filling out the game sheets, making sure there are many frozen pucks available for the game and organizing a stats person, goal judges and penalty box personnel at games.

With all those responsibilities, Hartlin arrives nearly two hours before puck drop.

“I think a lot of people know what we do but they don’t really see how entailed it is,” says Hartlin.

Hartlin got involved with the Tigers through his ex-wife’s brother. He was an announcer for Dal and he needed some people to help out so Hartlin started out doing videotaping and goal judging before his job evolved into his current one.

Hartlin starts his pre-game routine by making sure the technology is working properly.

He checks the clock and makes sure his two laptops and tablet are working. One laptop is for the music; the other laptop has a digital game sheet. The tablet is used as a backup in case the music laptop stops working.

After years doing this job, he knows what needs to be prepared, when that needs to happen and what backup options he needs. It’s a good thing – he needed to use the tablet once during the game. And when a glass panel fell at the start of the second period, Hartlin knew what to do and called the Forum staff about the issue.

Around 5:30 p.m. Hartlin goes to get the player scratches from the coaches.

During his walk around the rink he takes time to hug some of the security guards and chat with them for a few seconds. When he’s getting the scratches from the Dal coaches, Hartlin has a conversation with assistant-coach, Dean Dachyshyn, about the cruise Hartlin goes on every year.

After so many years, Hartlin’s formed relationships with tons of people who work at the Halifax Forum on game days.

His friendly and light-hearted personality makes it natural for him to become friends with many people.

When he walked into the referee’s dressing room he didn’t need to ask who any of the officials were, he just wrote down their names and joked with them.

During the game Hartlin jokingly tells Tigers’ forward, Kelly Bent in the penalty box, to “shut up and sit down.”

He also jokes with UNB’s coach Gardiner MacDougall that he’ll charge MacDougall $20 for every UNB player who gets an extra assist that UNB’s stats person argues for in between periods.

He has a strong relationship with the people he works with. During this game, the people working around the timekeeper’s box is Wayne Mont and Kat Larocque.

Mont was Hartlin’s mailman when he was a kid and the two love to poke fun at each other. Larocque looked after Hartlin’s dogs when he went away to get married, while Hartlin has helped Larocque move and drove her home at the end of the game.

Once the game starts it’s go time for Hartlin and his team.

Hartlin is busy making sure he stops the clock at the right time, plays music and gets the correct penalty and goal stats so he can announce them to the crowd right away – something that he makes a point of doing.

He also counts down from 5 to let the player in the penalty box know exactly when he can leave.

When the game is over, Hartlin takes the picture of the Subway player of the game.

On the back wall of the Forum, there are banners for both Dal and SMU because both men’s teams play there.

Hartlin makes sure he gets the angle of just the Dal banner in the background for Dal games. These are the fine details Hartlin doesn’t overlook that make him great at his job.

“He’s one of the most organized people I’ve known in a long time,” says Mont.

Hartlin says he’s working about 23 games between Jan. 10 and Feb. 5. And even though a game is scheduled for two hours, it’s usually five hours of work for Hartlin.

He jokes that his day off is not Friday but Monday when he goes back to work as a milkman. The workload can get tiring but Hartlin loves doing it.

“Last week we had a cancellation of a Saint Mary’s women’s game we were suppose to do and I was never so happy because I just didn’t want to get out and get started. Once I get here it’s fine,“ says Hartlin.

“I wouldn’t do it if I didn’t like it, so that’s what keeps me going.”

Even though this is his 25th year, Hartlin has no intentions of slowing down.

When asked how long does he think he will continue doing this Hartlin replied, “Probably until the day they don’t want me here.”

Hartlin gets paid enough money to go on cruises at the end of the year; but it’s not about the money for him. He does it because he likes to be a part of the team. 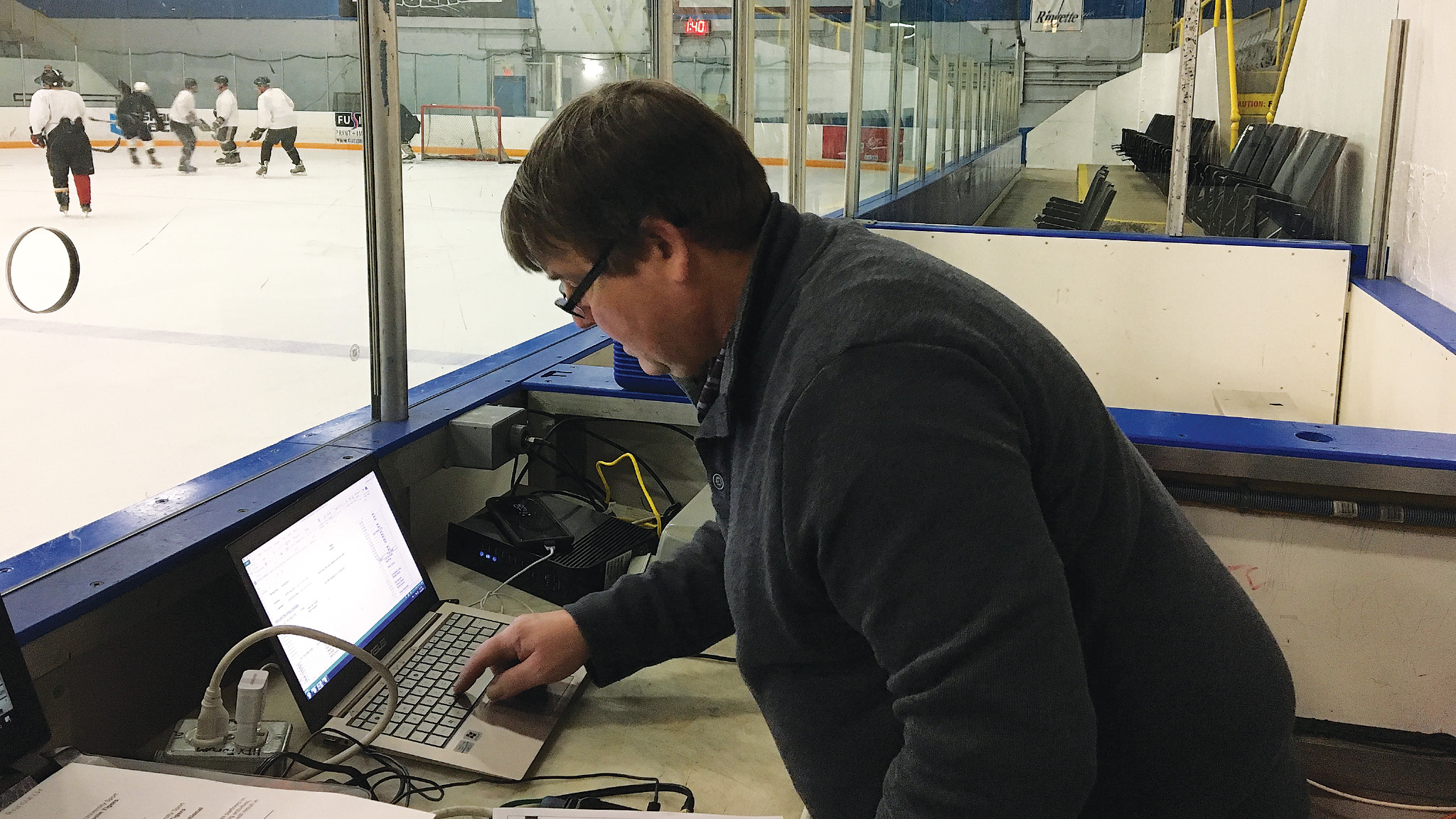