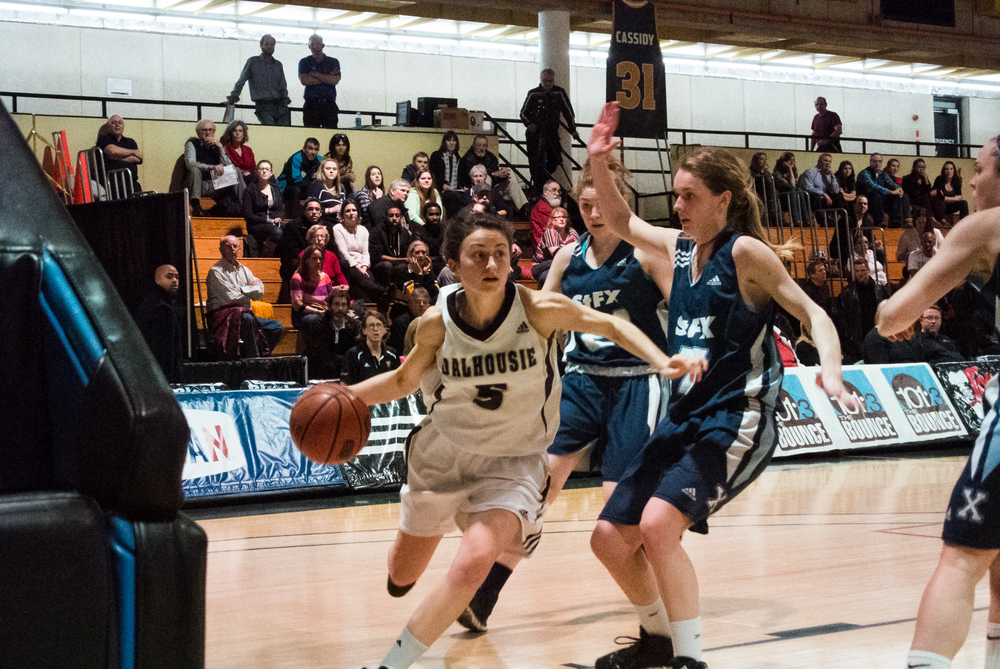 Courtney Thompson (5) driving to the lane against the X-Women. (Photo by Kit Moran)

Friday night is usually a time for celebration—an opportunity to leave one’s weekday cares behind. For the Dalhousie Tigers women’s basketball team, however, last Friday was anything but jubilant.

Missed defensive assignments and wasted offensive opportunities doomed the Tigers (5-5), who fell 77-63 to the St. FX X-Women (4-7) in an early evening game at the Dalplex.

“We just got outplayed,” said women’s head coach Anna Stammberger following the match’s conclusion. “We didn’t look after the ball well… They played an aggressive, physical defence and we didn’t respond.”

Turnovers were certainly an issue for the Tigers throughout the game, as St. FX seemed to be in the way of every pass. After being repeatedly knocked to the floor by onrushing X-Women, Dalhousie players began to look uncomfortable at the offensive end.

“Basketball’s a physical game, so you just have to kind of put that behind you and not get affected,” said third-year forward Tessa Stammberger, who led her team with 19 points off 8-for-16 shooting. “We practiced that yesterday too… it just didn’t come through.”

The Tigers—who were coming off two consecutive victories to start the New Year—turned the game around briefly in the third quarter, outscoring the X-Women 22-13 to regain the lead by a slim margin.

“We were having problems with our man defence,” coach Stammberger noted, explaining the third-quarter shift in momentum. “We changed it and went into the zone a bit more, and that helped us get some stops.”

However, the relief did not last long. The X-Women stormed back to start the fourth quarter, swarming the Tigers and once more forcing poor shots and mental errors. The Dalplex grew silent as the X-Women nailed basket after basket, outscoring the home team 26-11 to take an insurmountable lead.

While it will take a little while to recover from the defeat, Tessa Stammberger is confident her team knows what to do next. “We have to focus on […] making that extra pass, or being more patient with the ball,” she said, adding that limiting turnovers is also high on the to-do list.

Whatever the cure, the Tigers will surely be hoping that future Friday nights don’t result in such painful hangovers.

The Tigers are in fifth place after last weekend, with Acadia and UPEI right behind. They play at Saint Mary’s on Friday, Jan. 24 and welcome Cape Breton to the Dalplex the next evening at 6 p.m.