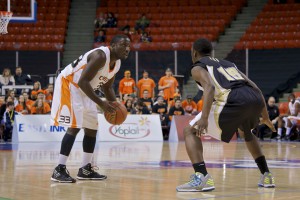 The defending title champs wouldn’t be so lucky this time around.

There would be no repeat for the Dalhousie Tigers as the fifth-seeded outfit was overthrown by conference MVP Jimmy Dorsey and his No. 4 ranked Cape Breton Capers 85 – 61 in the AUS Final 6 quarterfinals Friday at the Halifax Metro Centre.

The Tigers are eliminated from the playoffs with the defeat. Cape Breton will move on to face St. FX in the semifinals on Saturday. The winner heads to the championship game and automatically earns a berth to the CIS Final 8 tournament next weekend.

Behind 58 – 48 at the end of the third quarter, the Tigers buried any chance of a comeback when they found themselves on the wrong side of an ugly 16 – 0 run at the start of the fourth quarter.

Both teams were victims of foul trouble early. Dal was left relying on a young bench when Ritchie Kanza and Stephen Lopez were forced to sit after earning three fouls each in the first half. On Cape Breton’s side, Dorsey was also relegated to the bench for a portion of the first half for picking up three fouls as well.

When Dorsey was on the court for his 27 minutes, the guard picked up 23 points and six rebounds. Al Allovic added to the scoreline with 16 further points. On Dal’s end, Robert Nortmann closed his career with 22 points. Casey Fox was the next closest scorer with 10 points.

Knowing Dal’s hope for a winning result had been eliminated, Tigers coach John Campbell pulled his only graduating senior Robert Nortmann off the floor for the last time with over two minutes remaining. After a short discussion with Campbell, Nortmann went down the bench, hugging many of his teammates.

*An extended story will be included in the March 9 edition of the Gazette. 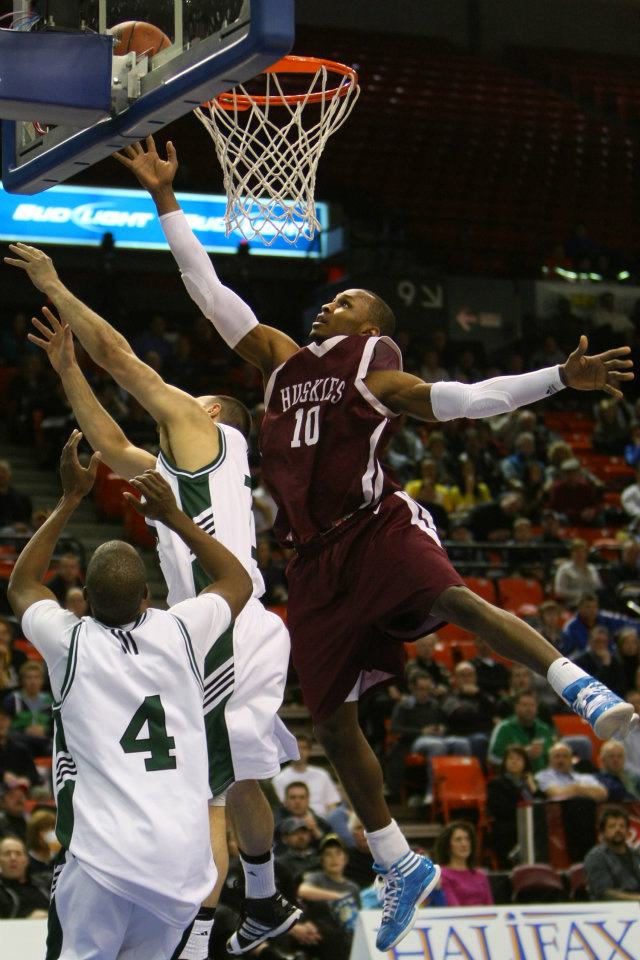 Coach Quackenbush’s retirement has been put on hold.

The sixth seeded Saint Mary’s had a sentimental reason to win, wanting to extend veteran basketball coach Ross Quackenbush’s final season behind the bench by one more game. With this motivation in mind, the Huskies managed exactly that, pulling off the upset against the higher-seeded UPEI Panthers 89 – 77.

Quackenbush has spent 23 years as head coach of the basketball Huskies.

The first quarter saw the Panthers exhibit their offensive dominance, outscoring the Huskies 23 – 17. UPEI tallied three buckets from outside, compared to one three-pointer from SMU.

Panthers star Terrance Brown played for eight minutes in the first quarter, totaling five points. Brown left the game early, however, due to an ACL injury and did not return.

Even with Brown out of the lineup, the Panthers still managed to put up several three pointers, dominating the long-range game. UPEI, proving the true depth of their team, expanded on their lead, ending the first half ahead 37 – 29.

While UPEI played exceptionally well in the first half, the potential for a comeback was apparent. SMU guard Jerome Smith played 17 of 20 possible minutes, and yet had not registered any points—only two assists.

As expected, Smith turned his play around in the third quarter, putting up 17 points in that frame. The real surprise was that Smith scored from the three-point line on five separate occasions in the quarter, allowing the Huskies to close the deficit to three points at the end of the third.

From the Panthers’ perspective, the third was merely a host of frustration. UPEI ran into foul trouble early and repeatedly. They saw their lead shrink as the clock dwindled; the fact they were playing without one of their stars was starting to show.

In the fourth quarter a relatively calm Quackenbush sent out his lineup, knowing full well this could be his final quarter as an AUS coach. The Huskies hit the floor hard, looking to stall the retirement of their legendary coach and advance to the semifinals.

Although the score fluctuated frequently, the Huskies managed to pull away in the final minutes of play. SMU held a 12-point lead as Panthers fans sauntered toward the exit with only seconds remaining.

With a visibly content, and still employed, Quackenbush, the Huskies earned the right to challenge Acadia in the semifinals on Saturday.