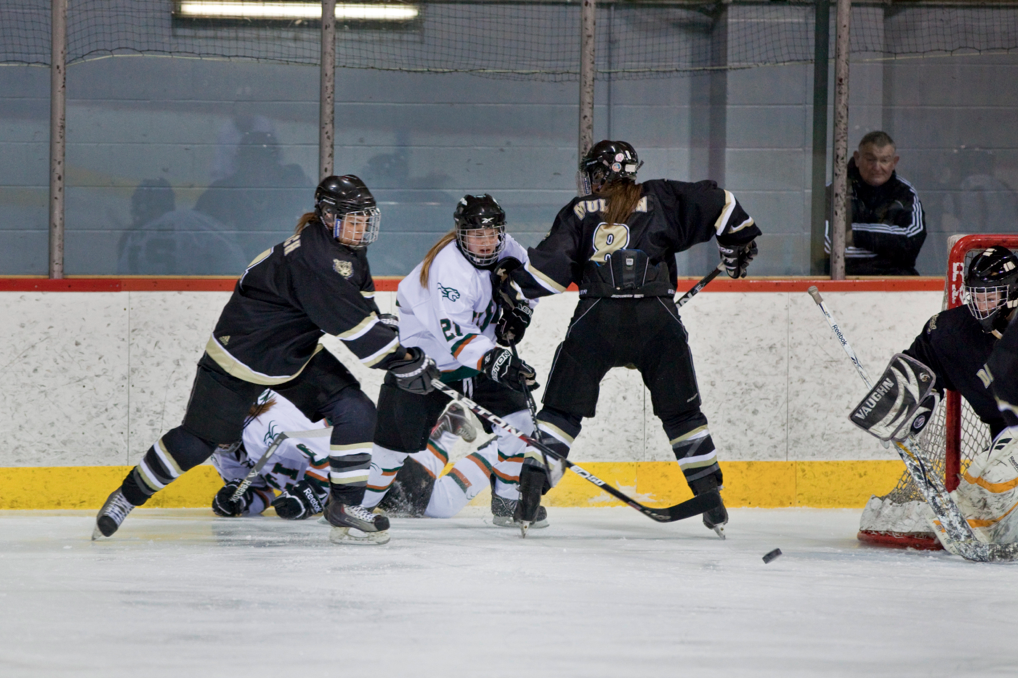 Dal's final round-robin game was a tight battle until the end. Photo by Paul Balite.

The Tigers closed their season in dramatic fashion, and more importantly, on a winning note.

Dalhousie beat the UPEI Panthers in overtime Friday afternoon 2 – 1 at the AUS women’s hockey championships in their last ever game at Memorial Arena. The win improved, but still ended, the team’s post-season record at 1 – 1.

The downside to the win was simply that it came in overtime. To stay alive in the playoff race, Dal had to beat the Panthers in regulation since the point UPEI gained in overtime prevents the Tigers from leapfrogging over either the Panthers or St. FX for top spot in the pool.

Despite the loss, Tigers head coach Sean Fraser thought his ladies played one of their best games of the year.

“I’m happy, pleased and proud of our girls,” he said. “We worked hard and I felt we deserved that.”

The Tigers needed to win by at least two goals to move on to the finals. Fraser pulled goalie Zoe Zivolak with more than two minutes remaining in the third when the game was tied at one, but the Tigers couldn’t get one past opposing goalie Kathy Dobson.

Both teams had identical chances to tie the game earlier in the third. There were back-to-back breakaways for both teams, but Dobson and Zivolak turned the respective chances aside.

Tigers captain Elizabeth Matheson said she has never been more proud of her teammates.

“It was definitely a bittersweet end,” Matheson said. “We would have wanted to get a few more goals to give us a chance [to move onto the championship game].”

Cassie Banfield was named player of the game for the second match in a row. She said scoring the overtime goal has a lot of meaning.

“Even though it didn’t really mean anything, it will still be the last goal ever scored in [Memorial] Arena [for the Tigers],” she said.

The Panthers face the X-Women Saturday in a winner-take-all matchup. The victor moves onto the final on Sunday.

It was an emotional end to the season for three particular members of the Tigers. Jocelyn Leblanc, Robin Nicolson and Robin Mullen all played their last game in a Tigers uniform.

Mullen was also happy to win her final game in front of their fans.

“To play our last game in this building and to come out with a win is just the cherry on top,” Nicolson said.

Early in the season, Leblanc set the all-time Tigers women’s hockey record for career points. She added her last goal when she scored in the second period to tie the game.

Leblanc contributes the majority of her success to her linemates.

“All the way through I’ve played with the best players on the team and we always jelled together,” Leblanc said.

Leblanc will graduate with her kinesiology degree and will apply to physiotherapy school. She is planning to take next year off to play overseas in a semi-pro league.

The bright spot for the Tigers is that most of the roster will stay intact between now and September. They are only losing three veterans but have a lot of young returnees to choose from. Sean Fraser has also been signed as the head coach for next season after holding the interim title this year.

This season may not have gone the way the Tigers hoped, but the future is bright. 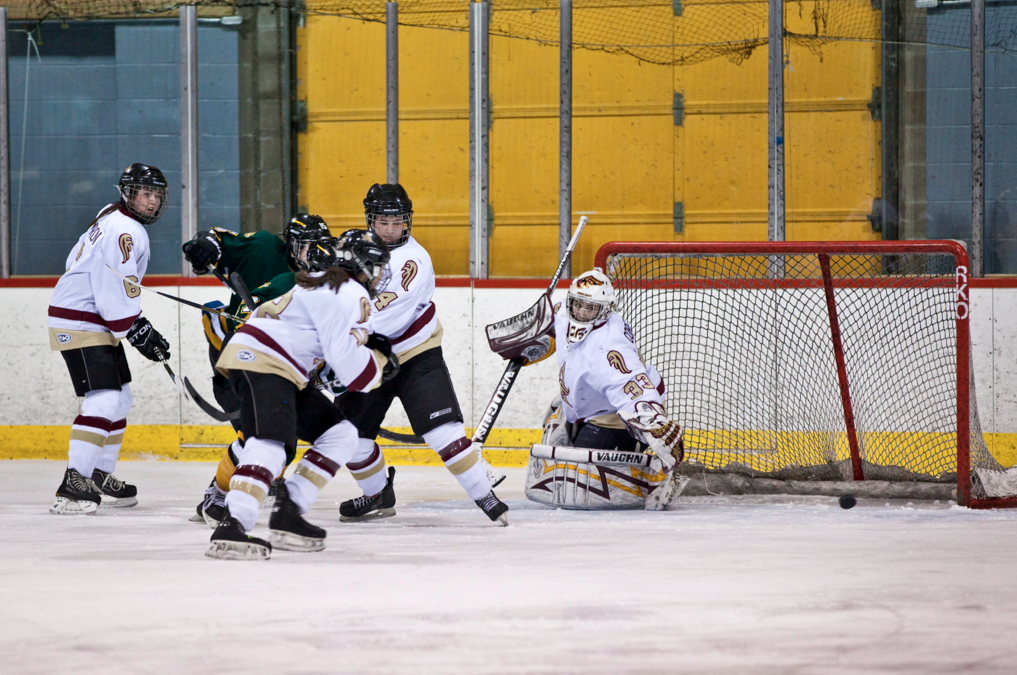 St. Thomas rebounded from a disappointing 5 – 0 defeat the day before in a big way.

With Mount Allison forcing overtime, the match officially knocked the Tommies out of contention for a berth in the championship game, despite winning their final game of the year.

Although they were vastly outshot by the Mounties, the game was St. Thomas’ to lose. A power play goal by STU’s Katie Brewster in the second period held on until the final minute of the third period when Mount Allison’s Courtney King tied it up.

The 1 – 1 scoreline didn’t hold for long in overtime. St. Thomas defender Courtney Fox capitalized on a power play handed to the Mounties at the end of regulation, scoring the game-winner 51 seconds into extra time.

Pool B action closes Saturday with Mount Allison facing Moncton. The winner heads to Sunday’s championship final to face the winner between St. FX and UPEI.

— By Ian Froese, with files from Dal Athletics.