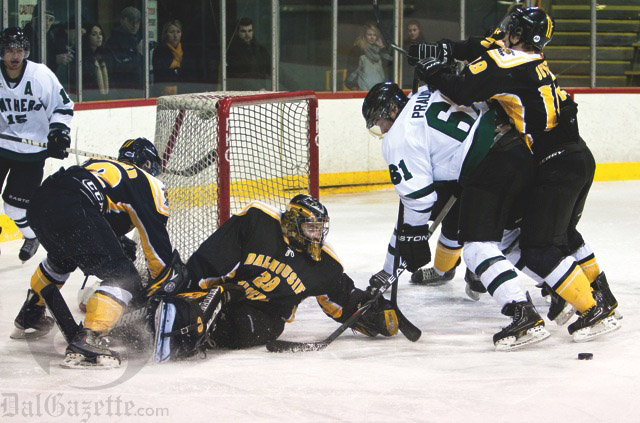 It may have seemed like a long shot, maybe even a miracle.

But Dalhousie’s men’s hockey team turned the far-fetched into a reality Feb. 4 as they defeated the UNB Varsity Reds, the No. 2 ranked team in the country, 3 – 2 in the shootout.

Dal earned two of four crucial points this past weekend to stay in the hunt for the sixth and final playoff spot.

“This was one of those things where you know it’s a penalty shot, you are trying to be patient, waiting for a hole to open up,” said Dal forward Brett Theberge, recalling his eighth round shootout winner. “There is an old saying in hockey that goes if you can’t find a hole, make one on your own, so I just kind of fired it and hoped for the best. Fortunately, the puck went in.”

Topping a perfect night for Dal, the St. FX X-Men, who currently hold the final playoff spot, lost 6 – 3 against the league-worst St. Thomas Tommies, meaning the Tigers are still one point out of a spot like they were when the weekend began.

That the Tigers were able to beat UNB is especially surprising considering the uninspiring 5 – 2 loss the team suffered against the UPEI Panthers the night before.

For a team that struggled mightily, and sat in the league basement for much of the first half of the season, the Tigers have turned things around in a way that can only be described as astounding.

Beginning Jan. 6, their first game back from the holiday break, when a 1 – 0 triumph over the Tommies snapped an 11-game losing streak, the Tigers haven’t looked back. Despite a tough schedule, Dal managed wins against Moncton, Saint Mary’s, and another from the Tommies, all resulting in a much improved 5-3-2 record compared to a disappointing 2 – 11 before the break.

This game, however, saw the Tigers play more like what became customary in the first half of the season.

Two short-handed goals in the first period was the nail in the coffin for the Tigers, who were deflated for the rest of the game. Both goals were scored on turnovers, resulting in the Panthers getting numerous clear breaks.

The rest of the game wasn’t any better as the Tigers played catch up to the speedy Panthers, while Dal’s defence seemed to be nowhere in sight.

“I think the big difference was special units,” said Dal’s veteran goalie Bobby Nadeau. “We got a little unlucky there and they capitalized. They are a pretty skilled team and if you give them chances like that, they are going to bury it. We kind of shot ourselves in the foot early in the game and weren’t able to come back in the second and third.”

This year has not been kind to Nadeau. Since returning in mid-January after recovering from another groin injury, he has not won in either of his two games and has not fully recovered yet.

The next evening the Tigers found their character. After falling behind 2 – 0 to start the game, however, things were looking bleak.

The Tigers, though, were not quite finished. A power play goal from Brendon MacDonald with just 43 seconds left in the second period brought life to the home crowd. He fired a slap shot from the point that went through the pads of UNB starting goalie Travis Fullerton.

Jordan Villeneuve-Gagne notched things up at two just 2:05 into the third. With the game now tied, the V-Reds began pressing to score the winner, while Dal was left on the defensive end desperately trying to hold on.

That was when bench boss Chris Donnelly decided to call a timeout.

“We talked about how we wanted to play defensive hockey for the rest of the game,” said Dal’s rookie goalie Wendell Vye, who replaced Nadeau for the night and was once again crucial in keeping his team in the game.

Vye stood on his head for the remainder of the period to set the stage for overtime and later the shootout. His team was outshot 21 – 2 in the frame.

The Tigers did not have long to celebrate their victory. On Feb. 8 Dal faced off against St. FX and if the black and gold won it would propel the team into the final playoff spot for the first time this season.

“Everyone is pretty happy in our dressing room, from the management to the players,” said Theberge. “This was a big two points against the best team in the country.”

The last weekend of the regular season will decide whether the Tigers are worthy of a playoff berth. Dal is at Acadia to battle the Axemen on Feb. 10. The Tigers then end their 28-game regular season in what might be a do-or-die game Feb. 11 at 7 p.m. opposite St. FX.