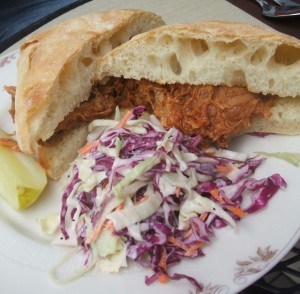 As winter continues to drag on, and school becomes increasingly stressful, a slow cooker can be your best friend. A slow cooker (also known as a crock pot) will allow you to make comforting, homemade, but incredibly simple meals with almost no prep work.

While a slow cooker may not be a student kitchen staple, they’re easy to find for little to no money. Even new, a basic slow cooker can be found for $30-$40, and a second-hand one can be found for significantly less at garage sales, Value Village, or on kijiji or Craigslist.

Once you have a slow cooker, there’s no shortage of easy recipes you can take advantage of, but a good starter recipe is pulled pork. Not only is it a delicious crowd-pleaser, but it’s also almost impossible to mess up, and quite affordable to make. Don’t get overwhelmed by the number of ingredients; I promise it’s easy to make. Also note: if you’re the only one eating this, you don’t need to cut open all 8 buns right away. Cut and toast your buns as you need them.

And now for the instructions:

And that’s it, you’re done! If you’re eating this alone, this recipe should make enough pulled pork to last you at least a few meals. Pulled pork goes well with a cold beer, and you can serve it with salad if you want to feel virtuous.