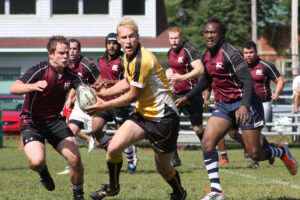 Despite Dalhousie’s dominating 67-0 score, the Tigers Division I rugby team began its 2011 regular season Saturday with a competitive match against Saint Mary’s at Wanderer’s Field.

Momentum was slow to generate in the first half, with Dal gaining tries from team president Ellis Gray as well as Ewan Wilson and Ryan Scarborough.

Later, the hard-hitting SMU lineup got tired, lost their energy, and Dal was able to quickly put more points on the board with further tries from Mike Hamson, Adam Fitzpatrick, as well as Gray, Wilson, and Scarborough.

SMU showed promise later in the game courtesy of Tapiwa “Taps” Rabwi. He had a great turnover and was able to shift the game’s momentum over to the Huskies for a portion of the second half.