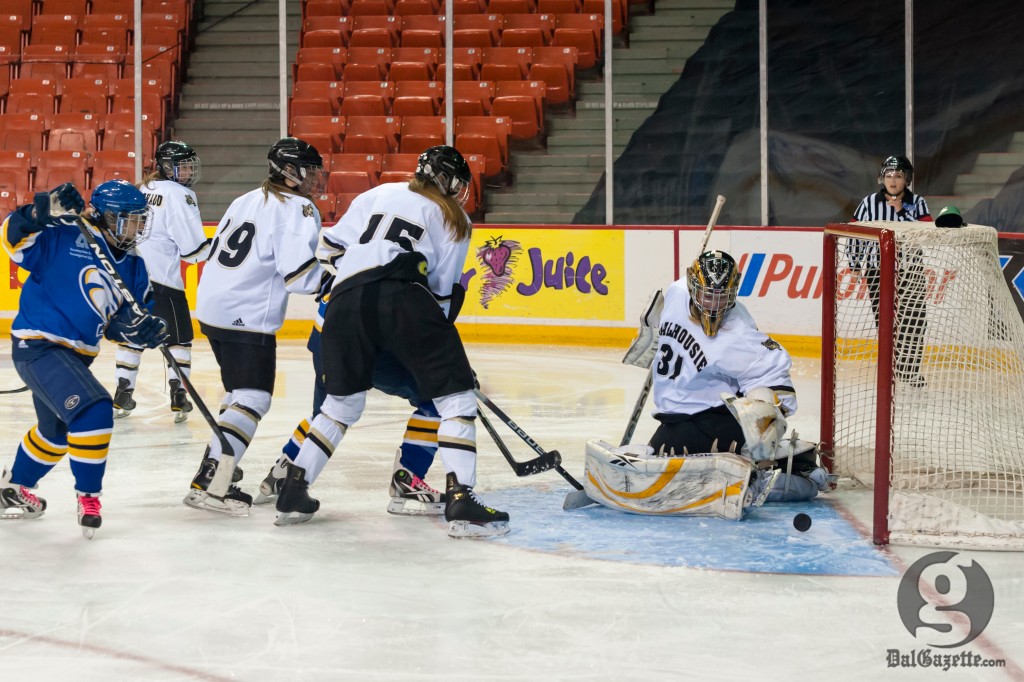 Women’s hockey is done for the season. (Chris Parent photo)

The Dalhousie women’s hockey team has been benched for the remainder of this season after a majority of its players were suspended for alcohol-fuelled hazing at a house party.

Dal revealed the severe consequences Thursday after the university disclosed the findings of their six-week investigation. All 19 non-rookie players were suspended. The inquiry began in October after the parent of one of the victims expressed her concerns to the team’s head coach.

The team’s captains were also stripped of their positions, effective immediately. The university plans to better educate its student athletes on its no-tolerance hazing policy to ensure an episode like this never happens again.

Dal spokesperson Charles Crosby would not reveal what occurred at the house party in question to protect the privacy of the affected players, but said it was a severe case where first-year players were hazed.

“There was a hazing incident involving drinking, humiliation, intimidation, personal disrespect—it was bullying,” Crosby said. “They will have to face the consequences.”

Crosby said the team’s transgressions were worse than he initially imagined.

“At the outset, you hope the infractions would be minor and could be appropriately handled with, say, a restorative justice approach, but as the facts emerged, the process led us to a different conclusion,” Crosby said.

“It’s clear there was a certain path we had to take.”

The team was essentially forced to forfeit the remainder of their schedule, since all but five team members were told to hang up their black and gold jersey.

The suspended women who had not completed their last year of eligibility are welcome to try out for the team in the 2013-14 campaign.

The non-rookies, from the graduates to the second-years, should have known better, Crosby said.

“It doesn’t take policy to understand that there are certain things you just don’t do,” he said. “We’re pretty confident that they knew full well that what they did was wrong.”

By Friday morning, the team’s roster was removed from the Dalhousie Athletics website.

The university’s investigation, which included an interview with every team member who wanted to speak (most of them, reportedly), concluded in late November. Dal did not immediately reveal the results because they felt learning of the punishments at that time would hinder the athletes’ academic performance during exam season.

The suspended athletes will not face any penalties academically.

Hearing the players’ side of the story will prove difficult, at least for the time being. The team signed university-endorsed contracts late this week promising not to speak to the media about any matter concerning the incident or the investigation, the Gazette has learned.

But Crosby questioned the validity of that statement.

“I have no knowledge of that. I would be very surprised to discover that that was true.”

In October, when the story first came out, the university statement was that a rookie player told her coach about the hazing. The new report said it was a player’s parent who spoke out. Crosby said they discovered the truth as their investigation progressed.

The university’s spokesman would not comment on whether the team’s coaching staff will be disciplined, but said it is the responsibility of Dal’s coaches to ensure their team is aware of the school’s anti-hazing policy.

The disciplinary sanctions come on the heels of what had already been a tumultuous season for Dal women’s hockey. At last place in the league at the midseason mark, the 2-8-2Tigers have bounced throughout the HRM for their ‘home’ games since last summer’s demolition of Dal’s campus rink. They have been playing at the Halifax Metro Centre, the Halifax Forum and even Alumni Arena at Saint Mary’s University.

During the holiday break, team members were told their promised new home rink in Truro would not be ready in time for this semester because of construction delays. They would have been relegated to New Glasgow instead, a community nearly two hours away from the university. There were discussions that Dal would be accommodated in a hotel the evening before their home games.

The Tigers had 11 games remaining in their schedule.

Crosby said the university is looking forward to next fall when the women’s hockey team makes their return.

“Next year’s team, we’d hope, would be a model for how a team can be welcoming and inclusive of all players, particularly first-year players,” he said.

Although this is believed to be the first incident of its kind resulting in sanctions at Dalhousie, other Canadian universities have recently suspended teams for hazing rituals.

Earlier this school year, the St. Thomas men’s rugby club faced a one-game suspension for ‘inappropriate behaviour,’ the Queen’s field hockey team forfeited a pair of matches, and the baseball team at Wilfrid Laurier was banned for a minimum of four games. The baseball squad fought off the threat of a season-long suspension by successfully making their case to school officials.

In December 2010, the men’s volleyball team at St. Thomas was sacked for the rest of their season after a teammate was found dead following a team hazing event. Police report the intoxicated rookie accidentally fell down the stairs in his apartment, hitting his head.

With files from Henry Whitfield.