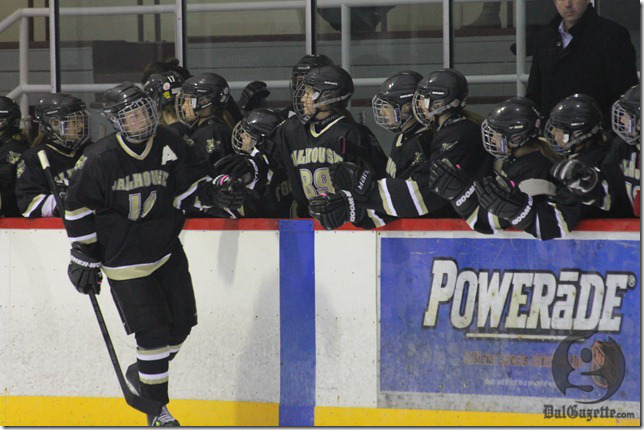 Nobody has been celebrating Dalhousie’s hazing fallout. (Richard Lafortune photo)

In an exclusive last weekend, The Dalhousie Gazette spoke with an unnamed player who claimed the team was ‘bullied’ during the six-week investigation process and are now being let out to dry by the university.

“What’s been interesting to observe based on things we’ve seen in the media, particularly the Herald and the Gazette, is that the reporting has been extremely selective in terms of what we understand actually occurred at the party.”

The unnamed player, who requested anonymity to protect her from potential punishment from the university, said that first-year teammates at the September house party were told to dress in blazers, Dal-themed boxers and had their hair slicked back with Vaseline. Throughout the night, she said, the team played drinking games and rookies were asked questions such as, ‘Who is the prettiest girl on the team and why?’

The school’s inquiry started in October after a parent of one of the victims expressed concern to the team’s head coach. All non-rookie players were suspended as a result.

The Tigers were effectively forced to forfeit the remaining 12 games of their season, as only the five rookies were not penalized.

To protect the privacy of the affected players Crosby would not go into detail on what he said the media has failed to report, but he explained the party involved “drinking, humiliation, intimidation, personal disrespect—it was bullying.”

The university spokesperson said he did not know if this selectivity in media reports is the fault of the reporters or what sources have decided to share with the journalists.

“What we’ve seen reported is only part of the story, and again it’s been very selective in terms of what is being shared,” said Crosby.

In addition to the Gazette‘s reporting, The Chronicle Herald interviewed the parents of two players last week who said the team will be fighting their penalties.

While the university has continued to deny requests for details, the team has defended itself.

“We would never try and make a player feel less just for a laugh—we’re a family, where we tell each other everything. That’s what makes this situation so hard,” said the anonymous team member, of how the university has portrayed the September party.

To complicate the issue, the unnamed player said the team was forced to sign a behavioural contract moments before getting on the bus for an October road trip.

“This was a document that was developed in conjunction with the students, so it wasn’t something that was presented to them,” said Crosby.

The unnamed player admits the team was asked to come up with behaviours to adhere to in light of the investigation, but she added they did not see a final copy until they were asked to sign it. There were no discussions about confidentiality during the team’s meeting with Dal Student Services, the source said.

But, according to the behavioural contract, the confidentiality agreement was enforceable only during the investigation.

Crosby questions why the players have said they are unable to talk to the media and family since the story made national headlines.

“I have been wondering that myself,” he said.

“At no point were they told that they couldn’t tell their families, for example, and in fact, during the investigative process they were invited to have support people with them. No one availed themselves of that opportunity.”

The player stated that during the investigation the team was told a member of Student Services would be their representative at the interview. But that person was actually asking questions of the players instead, she said.

Crosby said they delayed telling the athletes about the suspensions when the investigation concluded in late November because they waited for an opportunity that would work best for all involved.

“The exams were part of it, then the holiday season fell immediately after that,” he said. “The date that we arrived at felt like the most reasonable date where everyone could be accommodated.”

Much of the team flew back early from their holiday break on Dec. 27 to ensure they were around in time for an exhibition game scheduled against Saint Mary’s at the end of the month. The team’s first regular season game would have taken place on Jan. 5.

“Is there an ideal date [for telling the team]?” said Crosby. “Probably not, but it’s also not an ideal situation. The date seemed like a reasonable window.”

The debate between the university and its women’s hockey team has been further fuelled by claims that the players were treated unfairly by the school—another point of contention for the university.

“The process was fair,” said Crosby. “Again, everyone had the chance to be heard. No one was pressured in any way. What we know from the investigation actually came from the result of speaking with these players.

“I know that not all the players are thrilled with the decision and not thrilled with the consequences, but what this comes down to is that there were certain behaviours that were full-stop unacceptable,” he said.

The unnamed player admits the team views the hazing incident as wrong and are not defending their actions, but “we just want people to know how unfair the process was because we feel like we were lied to from the beginning.”

But Crosby said the media is focusing too much on the investigation, once again calling into question the reporting conducted by the local media.

“We’ve seen, again, in some of the Gazette stuff and the Herald, a lot of discussion around process and what not. What we’re not seeing as much about is reflection on the actions themselves and the behaviours.”

Crosby admitted this is a no-win situation for anybody, but said Dal’s women’s hockey team can become a model for other varsity squads.

“This is not an ideal situation. So what can we do? We can look forward. We can figure out how we can build a stronger team next year and part of that is understanding that there will be no acceptance for this kind of behaviour and there will be consequences.

The team had yet to offer an official statement about the hazing fallout at the time of print. However, the anonymous player made it clear the team is looking at a number of ways to move forward, such as using legal representation to fight their suspensions.

A Facebook group started this past weekend by a team member, requesting support to help the Tigers return to the ice, received over 1,000 likes in a dozen hours. The total was nearing 1,400 on Jan. 8.