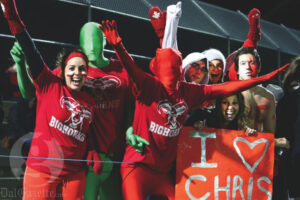 It took 90 minutes, two halves in extra time and 10 rounds of penalty kicks, but, in the end, the Howe Hall Trojans would still come out on top over the Risley Hall Big Horns in the annual residence charity soccer game last Saturday night.

Despite the cool temperatures, about 400 students showed up to cheer on their team in a match  traditionally seen as the start to the fundraising campaign. It concludes at the annual Charity Face-Off hockey game in March.

The Trojans took a 6 – 5 edge on penalty kicks following a 1 – 1 tie after two scoreless five-minute overtime periods. It is Howe Hall’s fourth consecutive victory at the residence soccer game.

Picking up where they left off last year with a 7 – 0 win, the Trojans scored early courtesy of a strike by Nikki Burge placed just outside the reach of the Big Horns keeper.

Adjusting his lineup, Risley Hall manager Linden Mattie prevented his team from falling behind further, keeping his opposition under control for the rest of the first half and trailing just 1 – 0 into halftime.

The Trojans started the second half with a high tempo, pressuring their opponents early, and were unlucky to be denied a penalty in the opening moments when Matt Murphy was bustled off the ball in the box.

Risley’s defence was tested again minutes later, but Chris Briggs made a number of key saves to keep his team down by just one goal.

With 15 minutes left in the game, Mattie sent his backup keeper Mackenzie Inglis on a makeshift strike and his faith was immediately rewarded. Inglis pressured the Trojans defence, causing a defensive lapse between the keeper and defenders, forcing the ball through to score the tying goal.

Though they enjoyed much of the possession, Howe Hall was unable to break the deadlock and late in the game Fraser Godbout vented his frustration and pushed a Risley player, which earned him a yellow card.

Heading into the first extra time in the residence game’s five-year history, both teams were fired up. Although supporter numbers dwindled with the cold, both sets of fans were loudly singing along.

Briggs was the star of extra time, forced into action countless times to keep his team’s chances alive. He made his biggest save of the game in the dying seconds, denying Joe Najjar twice from point-blank.

Still tied at a goal apiece after extra time expired, the match went to a best of five penalty kick shootout.

The Big Horns took an early 3 – 2 lead after four rounds, but the Trojans scored when they had to, battling back to even the total at three after five rounds. More drama ensued when Trojans keeper Alex Berry was shown a yellow card for taunting his opponent after making a save. The referee displayed no patience for the unsportsmanlike conduct.

Both teams scored in the sixth and seventh rounds before the two sides would each miss in the eighth and ninth rounds. This left Sam Day to kick in the 10th round for the Trojans and she made no mistake, placing her shot high and right past Briggs.

Needing to score to extend the shootout, Kathleen Orrell of the Big Horns, despite a well-struck ball, was denied a goal by a fully outstretched Berry.

After the game, Mattie was full of praise for his players, in spite of the defeat.

“These players came out and worked unbelievably hard for a full 90 minutes. You can’t ask for more than that.

The Big Horns goaltender was also a recipient of his manager’s acclaim.

“Huge credit to Chris Briggs; many people forget, but he played in the first half of last year’s game and came off with the score tied 0 – 0 before we crumbled to a 7 – 0 defeat,” said Mattie. “And for him, this was a big game, and we can stand proud of how we played today.”

Trojan manager Tim Vanderweide was also quick to recognize Briggs. “Their keeper played great the whole game and really kept the scoreline close. We felt we carried the play for much of the game, but just couldn’t find the back of the net.

“A few lucky bounces here or a couple of better passes and this game was over, but credit to the other team for shutting down our most skilled players and making this a hard-fought game.”

The Trojans and Big Horns battle next on the ice when they match up in the annual Residence Charity Face-Off in late spring.