Inside the Tigers’ rookies 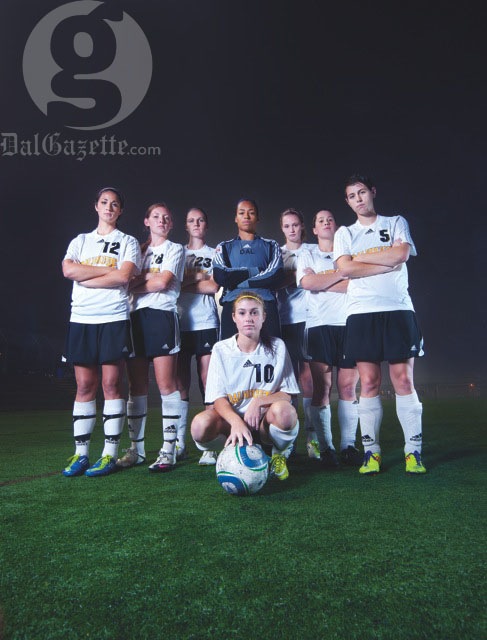 The future of soccer at Dal. Photo by Angela Gzowski

The Tigers’ eight rookies, aside from Kristy McGregor-Bales, are listed clockwise in order of their appearance in the photo above.

Born and bred in Halifax, Gabriel knows her way around the city, even if it’s maybe because she followed her older sister around. Gabriel began playing the sport when she was 10 because she claims to have copied whatever her sister did. “I started earlier than her so I got the chance to get better than her,” she says, adding her sister is no longer playing competitive soccer. – IF

Willox played for the infamous Calgary Foothills club that produced Owen Hargreaves. “Around junior high level I decided I wanted to play in university,” she says. She enjoys how small Halifax is, and her career direction has nothing to do with Bayern Munich, fortunately. “I’m in commerce. I don’t know what I’m going to do,” she says. – DM

Jumping from high school to university soccer wasn’t too big a leap for Junor: she was already used to playing for the Tigers. “Once a Tiger, always a Tiger,” she says, recalling her days with the Streetsville Secondary Tigers in Missisauga. The keeper had her start when she was 12, defending the net for the first time when nobody else in her house league was interested. She hasn’t looked back. – IF

Homerski adds a physical presence to Dal’s lineup as a target striker who can control the ball. She hails from Waterdown, near Hamilton. She’s played soccer for about 14 years and broke the Ontario high school goal-scoring record, and has also been on a tour of AC Milan. She’s enjoying the waterfronts in Halifax. “I like both,” she says. “I like the air.” – DM

From the north to the west to the east, Breton adds Halifax to her list of homes this fall after living in Whitehorse until she was seven and then growing up in Victoria. She devoted her time recently to the U18 championship Victoria Highlanders, which won their league by 13 points. Unfortunately for her high school, she “didn’t play for them because they weren’t very good,” Breton says, chuckling. – IF

Krieg is used to the sidelines, but not because she had any other choice. The Ottawa native returned to the pitch this spring after a year and a half long hiatus because of ACL, MCL and meniscus injuries. “I’m getting my speed back,” she says, conceding she’s not at 100 per cent yet. Krieg cites the friendliness of Halifax as her favourite part of the coastal city. – IF

Donnelly played with Doriana Homerski in Burlington before being recruited by NCAA schools in the U.S., including Rhode Island. The U.S. “academically aren’t the best choice,” she says, instead choosing to come to Dal for kinesiology. She’s immediately aimed high in Halifax, picking The Five Fishermen as a favourite restaurant and she speaks of the mussel bar reverently. – DM