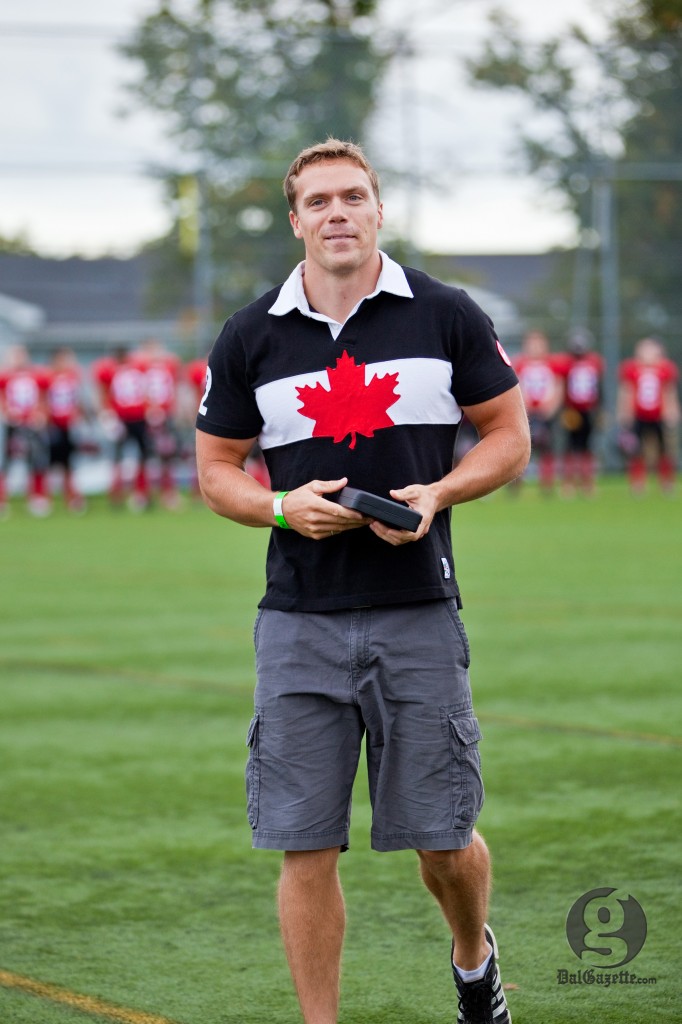 Though it may not compare to his Olympic glory, kayaker Mark de Jonge, 28, was honoured to take part in this year’s football season opener at Dalhousie.

“I learned that there are a bunch of engineers on the team,” he says, “so it was cool to be able to do the opening kickoff for Dal and for Dal engineering.”

It has been a whirlwind summer for the 2009 civil engineering graduate, culminating in a bronze medal for Canada in the 200 metre kayak sprint.

“It felt very satisfying,” he says of reaching the podium.

“I had trained for 15 years until I was able to compete at the Olympics, and a lot of hard work went into that. To have that culminate in something meaningful like an Olympic medal is really satisfying for me.”

The season opener was de Jonge’s first Tigers football game. The team, after all, only returned from its 34-year hiatus in 2010, following his graduation.

“I never really had time to get into the school spirit because I was always away training,” he says. “So it’s nice that I can come back and enjoy it now as a Dal alumnus.”

De Jonge was not the only former Tiger competing at the Games.

Geoff Harris, a former arts student, ran in the 800 metre event. Harris qualified for the semifinals with a career-best time of 1:45.97 but he needed a faster time than his seventh-place finish of 1:46.14 to advance.

Harris, however, did not even expect to compete in London this summer.

“It was a bonus along the way,” he says. “I was prepared that 2012 was not an option, but I had a season that was a bit remarkable.” That season included running four personal best times.

Life for the 25-year-old runner has only changed slightly since London.

“I’m definitely more recognizable, and there are all the little perks that come with that,” he laughs.

“My support has always been pretty exceptional, so it’s the same as usual from my support staff. We’ve been doing the same thing for four years. Not a lot from that perspective has changed.”

Management graduate Danielle Dube also competed in London. It was a challenging week on the water for Dube, placing 27th overall out of 41 competitors in women’s laser radial sailing. She needed to finish in the top 10 to compete for the medals.

Canada’s sole representative in the competition earned her berth in January at a World Cup event in Florida.