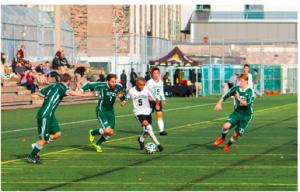 Ten Tigers held a 1-1 draw at Wickwire field against the UPEI Panthers on Oct. 18. The Tigers started the game at sixth position in the Atlantic University Sport (AUS) men’s soccer standings and needed a win to overtake the Panthers.

The Panthers, who settled for a 3-3 draw against UNB the previous evening, had majority possession in the first quarter, but didn’t pose a great threat on goal.

The chances were few and far between for both teams, but the Tigers took control after effective communication at midfield.

The Tigers, who lost Zach Mbolekwa, James Nearing and co-captain Mark Hagen to injuries against the Acadia Axemen the night before, almost took a lead in the 26th minute through top scorer Bezick Evraire, but the shot was deflected for a corner.

The Tigers continued to play well and were ultimately rewarded in the 42nd minute from a bullet of a shot into the goal from skipper Tyler Lewars to give the home side a 1-0 lead just before halftime.

The Panthers kicked it into gear in the second creating several opportunities, but Tigers’ netminder Jason Ross was up to the task. The Panthers finally levelled the game in the 61st minute through a nicely timed header by Jason Mallard from Jared Murphy’s corner kick.

The balanced match took a turn in 64th minute after Tigers’ defender Ryan Lewars was sent off for his second yellow card after fouling one of the Panther’s players and subsequently arguing the call with the referee.

As the fog descended on Wickwire, the intensity picked up and the Panthers continuously attacked the net. Jonathan Doucett stepped up and played strong defensively, preventing UPEI from taking advantage with the extra man. Both teams ultimately had to settle for a point, which was the second consecutive draw for both sides.

Third-year engineering student Robert Engert and Tiger defender was named Dal’s player of the game. Mallard received the award for the Panthers.

“I am not satisfied with the result as this was a home game and we would have liked three points,” said head coach Pat Nearing after the game.

Ryan Lewars will be suspended in the next game for his red card. Nearing also confirmed that Mbolekwa is ruled out for the rest of the season. Nearing and Hagen will be fit for next weekend’s games.

Dal will play their last two matches of the season at home against the St. FX X-Men on Oct. 25 and the Memorial Seahawks on Oct. 26. Though the Tigers sit in sixth position, they technically are not in a playoff position as the Seahawks, who are below the Tigers in the standings, are guaranteed a playoff berth. Walking away with points is critical if the Tigers want to make the postseason.