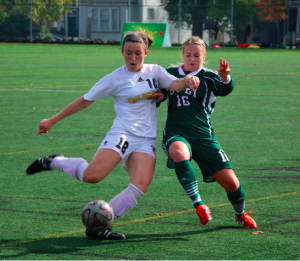 The Tigers are on a roll, winning three of their last four and not losing since facing Cape Breton at home on Sept. 27. The Tigers currently sit fourth in the Atlantic University Sport (AUS) standings with a 6-3-2 record.

“It seems like right now it’s starting to coming together,” said head coach Jack Hutchison after the team’s 2-0 victory over the UPEI Panthers.

Dal faced the undefeated Acadia Axewomen on Oct. 17. The last time the teams faced each other, neither were able to find the back of the net and the game ended in a 0-0 draw.

This time around, the Tigers played much stronger. Tigers’ first-year striker Jensen Hudder put away her third of the season in the 34th minute to put the Tigers up 1-0.

At halftime, the Tigers had nine shots to the Axewomen’s three.

The black and gold kept the momentum going in the second with chances from Kristy McGregor-Bales and Victoria Parkinson. It looked the Tigers were poised to give Acadia their first loss of the season until Emily Nickerson tied the game for the Axewomen in the 87th minute, resulting in a 1-1 draw.

Dal shook off their late-game blunder and continued their dominant play the next day against the UPEI Panthers. Parkinson opened the scoring for the Tigers early off a strike from just outside the penalty box in the seventh minute. McGregor-Bales and Sam MacDonald worked effectively on the Tigers’ back end to shut down Panthers’ top scorer Maria Scichilone and maintain their one goal lead throughout.

Michelle Yates, who was named Player of the Game, added her seventh of the year in the 83rd minute to put the game out of reach.

Before the Thanksgiving break, the Tigers dominated the Moncton Aigles Bleus on the road, winning 7-0. The follow- ing day they beat the Canadian Interuniversity Sport (CIS) 10th- ranked UNB Varsity Reds 1-0, giving UNB their first loss of the season.

Hutchison said the games were confidence boosters going into their homestand.

“The feeling of where you know the players are starting to believe in themselves and can play together, it shows that they want to play,” said Hutchison. “And for me, that’s what’s really important.”

The Tigers have two games remaining in the regular season. They take on the St. FX X-Women on Oct. 25 at Wick- wire, followed by another match at home against the Memorial Seahawks the next day. Both start times are 1:00 p.m.

The X-Women have struggled as of late, tying the last place Aigles Bleus and losing to the Saint Mary’s Huskies who previously did not have a win recorded.

After their disappointing weekend, the X-Women have slipped to seventh place and are currently out of the playoff picture. The Seahawks, however, have effectively united after a slow start to their season. They currently sit third in the standings with a 7-3-1 record and have clinched a playoff spot.

The Tigers and the Seahawks would face each other in the first round of the playoffs if the sea- son were to end today, so their last match of the season is destined to be gritty.

AUS Championships will be hosted at Dalhousie from Oct. 31-Nov. 2. All games can be viewed live at AUStv.ca.