Overtime solves nothing for men’s basketball 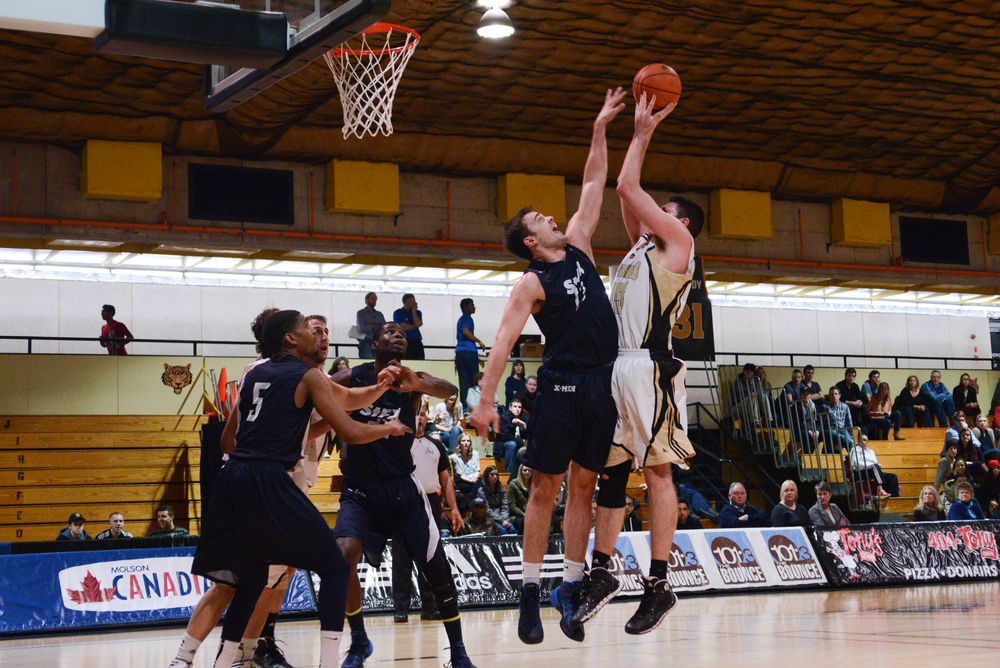 Devon Stedman (15) puts up a contested shot in the paint. (Photo by Kit Moran)

After pulling out two of four points the previous weekend in Fredericton against the University of New Brunswick Varsity Reds, Dal was unable to get their season back on track, losing in overtime to the St. FX X-Men 76-72 on Jan. 17 at the Dalplex.

The Tigers put up a valiant effort against their Atlantic University Sport (AUS) third-ranked counterparts; however, the X-Men were able to effectively preserve in the extra frame. After a back-and-forth contest through three quarters, the X-Men were able to take the lead with five minutes remaining in the fourth. Simon Marr stepped up for the Tigers in the dying seconds of the bout, nailing two three-pointers to tie the game at 65 and ignite the home crowd.

After St FX’s Jordan Clarke nailed a jump shot with just over a minute remaining, Dal’s Ritchie Kanza Mata drove hard to the net, making the layup while getting fouled in the process. Mata was unable to sink the extra shot, sending the game to overtime.

The extra frame was another back-and-forth battle with equal opportunities coming from both sides. The X-Men pulled ahead with 1:24 remaining after Kevin Bercy sank a key basket and followed up with a free throw shortly after. St. FX didn’t look back from there and were able to grind out the final minute of the game.

Marr had a game-high 24 points in the contest, while William Donkoh led the way for the X-Men with 20 points.

This was the first time the two teams faced each other since St. FX knocked Dal out of the playoffs last season in the semifinal. The last time the Tigers beat the X-Men at home dates back to Feb. 12, 2013. The loss leaves the Tigers with a 2-8 record on the season and only ahead of the Memorial Sea-Hawks in the AUS standings. Dal currently sits 14 points out of a playoff spot.

The Tigers now have to prepare for a crucial weekend of play, as they have two four-point games ahead of them against their cross-town rival Huskies on Friday, followed by the Cape Breton Capers on Saturday. The teams hold the two posts above the Tigers in the standings.