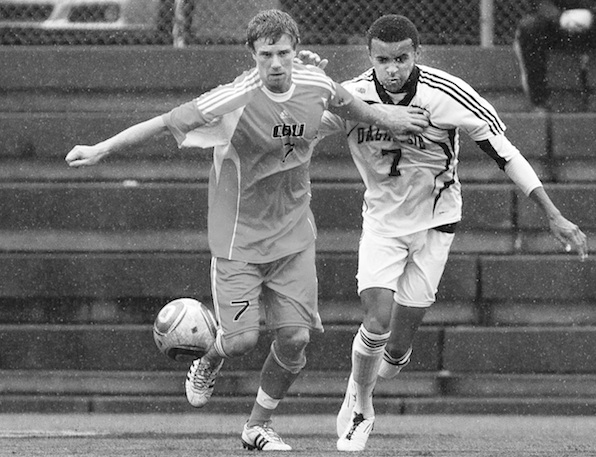 Rookie Bezick Evraire, 17, is quickly becoming the Dalhousie Tigers most dynamic soccer player. It’s no surprise given his resume. He has been a part of the well regarded Ottawa Fury U16 and U17 teams and has been recruited for a six-month tryout with the Toronto FC Youth Academy.

When he first donned the Tigers uniform earlier this fall, the up-and-comer had modest goals.

“Since I’m an attacking player, [it was] scoring a game-winning goal,” he said.

If his early dreams are any indication, Evraire should have no problem exceeding expectations. He already got his wish two Saturdays ago with his newest team. He took a header out of the air from Nathan Rogers, a remarkable volley with eight minutes remaining that secured the 2 – 1 victory against the Moncton Aigles Bleus.

“I saw the ball touch the mesh and I was gone towards the corner flag,” he said, recalling the feeling. “You close your eyes and you’re like, ‘Is this really happening?’”

Such a game-winning scenario has played out in his head for years. It pretty much began on his birth date, Oct. 7, 1993.

“A month later I had a ball in my crib because my dad put it there,” Evraire said. “Literally, all my life I’ve been playing soccer.”

One has to believe that somewhere in his head, he knows of the promise he holds, but he certainly doesn’t act like the Tigers star he appears destined to be. He’s not getting ahead of himself, and it’s largely because of his upbringing.

Not long after his father put that ball in his crib, Evraire’s parents separated, leaving his mother to raise him and his younger sister. She moved the family from Toronto to Ottawa when the future Tiger was three.

“What has my mom not done for me? My mom has done everything. My mom is basically why I’m here.”

By “here,” he means on the starting roster of the Dal soccer team.

“She’s my coach. My mentor, and, obviously, my mom. She’s everything.”

While playing for the Ottawa Fury youth team, Evraire graduated on the honour roll from St. Matthew Catholic High School.

“Basically, it’s my mother’s influence,” he said, explaining how he managed a busy schedule of soccer and academics. “She had to push me so I could do both at the same time and do them well.”

He explained he has no intention of letting his grades slip now that he’s a bachelor of arts student at Dal.

Evraire brings mounds of soccer experience with him to Wickwire Field, including his time spent on some impressive youth soccer stages. One of his best memories is when his Fury travelled to Spain to take on the Valencia youth, the development team feeding into the renowned La Liga.

Evraire still regrets the free kick he blasted off the crossbar during the match.

“If I could say I scored against Valencia, that would be insane.”

In 2010, Evraire was immersed in his highest level of soccer yet at the tryout for the Toronto FC Academy. While there, he began to understand how seriously professional players take their craft.

Though he dreams of reaching that level, he feels the more balanced lifestyle offered by Dalhousie is perfect for where he is right now.

“It is fun. It is serious, but I also have a pretty good group of guys with me too. So it’s really enjoyable.”

Graduated Tigers keeper and current team manager Colin Power is convinced Evraire has the talent to be great.

“If he puts the time and effort into it then he’ll definitely be one of the best players that Dal’s had on their team.”

With grand dreams of someday playing for the Arsenal Gunners of the Premier League, Evraire has his work cut out for him. But with the grounded approach he has to life and his craft, he might have a shot.