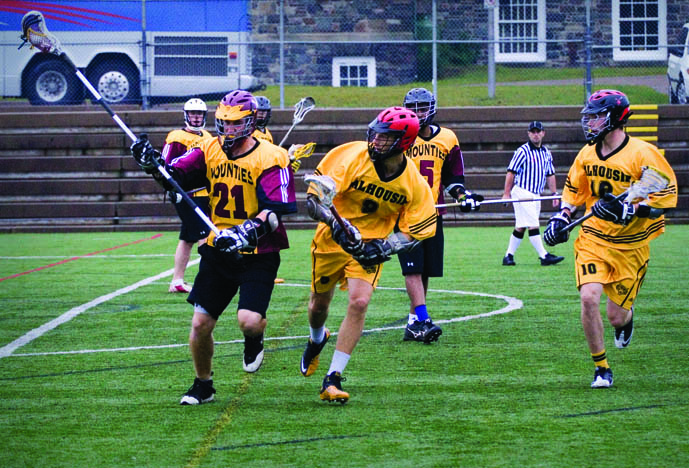 The Mounties were only down by a tally, 5 – 4, after the opening 20 minutes, but that was about all the visiting side had to offer offensively. They added just two more goals in what became a 23 – 7 clobbering by the Tigers lacrosse team last Saturday evening at Wickwire.

“Really, it comes down to our inexperience. Dal’s a very good team. They’re very deep, and even at half, a 12 – 6 game is still a close field lacrosse game,” said Wallace. “It’s coming, but we didn’t have the depth to compete with Dal tonight and that was really our downfall.”

Tigers midfielder Nick Jarret said, even in such a blowout, focusing on the task at hand was never an issue.

“We didn’t take them for granted at all,” said the three goal-scorer. “They’re a good team. They’ve got some good guys and they’ve got quite a few good shooters. So, we came in prepared.”

The Tigers switched out their opening lineup as the game proceeded, giving the rest of their nearly 30-man roster quality playing time. They got on the scoreboard too, scoring six unanswered tallies in the third quarter. The Mounties paused the barrage with their final marker at the end of the frame to make it 16 – 7. Adding insult to injury, the Tigers further dismantling the mediocre Mount Allison defence, easily scoring seven more times to close the game, 23 – 7.

Along with Jarrett, the Tigers also received three markers from Brendan Clark and Rob Griffith. Duane Davis contributed with four.

The Tigers are scheduled for a tougher challenge Sunday, Oct. 2 in an away contest against the 2 – 2 St. FX X-Men.