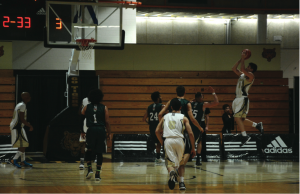 Men’s basketball are off to a roaring start. • • • Photo by Jennifer Gosnell

Head coach Rick Plato provided a fresh face in leadership last year following previous 11-time head coach John Campbell transferring to lead the University of Toronto’s basketball team. It was clear the Tigers were unable to adapt to the change as they finished the season 6-14 and out of playoff standing.

Now they’re faced with a different task. Seven of last year’s Tigers have not returned, leaving eight new faces to fight to earn their stripes and regularly compete on the Dalplex floor this season. There are no fifth-year players and only one, the injured John Traboulsi, in his fourth. That leaves third-years Devon Stedman, Jarred Reid and Kashrell Lawrence to carry the main portion of the load.

Lawrence says the team is not fazed in the slightest and is ready for the task at hand.

“Everyone’s hard working, we each hold each other accountable and it’s a really close-knit team,” he said.

Reid also says the team’s inexperience in a non-factor.

“The new guys have been contributing right away,” he said. “In points, rebound, everything. They bring a certain toughness to the culture that we really want to bring in.”

The transition into a veteran player can often lead to added pressure to produce more day in and day out.

But not for Reid.

“It’s not really pressure, it’s more excitement,” he said. “Becoming one of the older guys, people call your name when it’s game time or show time and I like that feeling.”

Lawrence has the same perspective on the transition, too.

“Your first year they don’t really expect much, so if you do well it’s a bonus. Second year it’s kind of the same thing. But in third year, if you’re doing the same thing in first and second year you’re under producing,” Lawrence said.

If the past two weeks have been any indication, the team has connected just fine. After losing their season opener in overtime to the UPEI Panthers, they’ve rebounded big time and put together three straight wins to start the season 3-1 and among the top teams in the league.

Stedman made his return to the lineup after missing the first weekend due to concussion-like symptoms. Stedman only put 13 points on the board over the two games against Memorial.

Despite his slow start, Reid and Lawrence both agree that Stedman will be a driving factor for the team throughout this year’s campaign.

The Tigers are set for their first cross-town rivalry of the year against the Saint Mary’s Huskies, who have had a slow 1-2 start to the season. They then travel to Wolfville on Nov. 22 to take on the Owen Klassen-less Acadia Axemen. The loss of the Axemen’s star player seems to have proven costly early on, as they’ve only been able to pull off wins in one of four games.