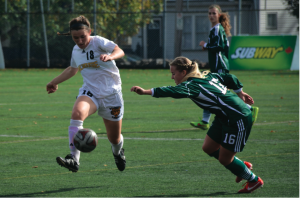 Women’s soccer fell 1-0 to Acadia in quarterfinals of the AUS championships. • • • Photo by Jennifer Gosnell

It was a semester of unreached expectations for three of the four completed varsity teams at Dalhousie. Men’s soccer was unable to land a spot in the playoffs, women’s soccer lost a winnable game against Acadia in the AUS quarterfinals on their own turf and the men’s cross-country team, once again, was unable to surpass St. FX in the final race.

The only varsity team that gave us something to cheer about was the women’s cross-country squad who easily walked away with AUS title once again.

All hope is not lost, though. A couple of the university’s club teams had us on our feet by taking home championships in impressive fashion. We’ve also seen solid starts to the season from the men and women’s basketball and volleyball teams. Hockey is doing, well, better than last year. So that’s good.

Now let’s dive into analyzing each team’s performance on an academic scale. Here’s your annual semester in review, folks.

Since both volleyball and basketball teams have only completed two weekends of play, it seems unfair to provide them with an overall ranking at this time. We’ll leave them for next semester once we know more.

This one’s a pretty easy grade to distribute, if you ask me. Not only did they go a whole season without losing a game, but there really wasn’t an instance where it looked like they could falter. The men’s lacrosse team completely dominated from their initial 17-10 victory over Saint Mary’s to beating St. FX in the Maritime University Lacrosse League championships to walk away with their fourth-straight title. They also haven’t lost a game since Sept. 12, 2012. Nice job, fellas.

Again, an easy grade to come up with. The women runners were in command during every single race of the season. Especially the championship race, which is all the more impressive. All seven runners who competed in the AUS finals finished within the top 10, resulting in the squad only receiving a mind-blowing 16 total team points. The next closest team was UNB with 59. Fourth-year Ellen Chappell, who won the AUS championships by completing the 6 km race in 22:22, was named the AUS women’s cross-country athlete of the year. Head coach Rich Lehman was awarded coach of the year in the same category. Impressive job, once again.

It’s one thing to make the AUS playoffs, but another to find success within them. With only two fifth and two fourth-year players, it was clear that the Tigers would be relying upon inexperienced team members in order to find success. But if previous years are any indication, Dal women’s soccer team should never be ruled out of contention. With the dedicated Jack Hutchison leading the team and each team member’s desire for success, the team always becomes a force to reckoned with. This year they just couldn’t get the job done come playoff time, resulting in them having to fix the mistakes for the future.

Entering the season, this team was filled with confidence. Matt McNeil and Matthias Meuller were in the prime of their AUS running careers, they had some solid recruits in Will Russell and Jacob Wing, and it looked as though they were prepared to reclaim the AUS title. But the X-Men have always been the thorn in the Tigers’ side that they just couldn’t overcome. The X-Men once again remained consistent throughout the season and won their third-straight AUS banner.

Scoring woes and an inability to win critical matches at the end of the season resulted in the men’s soccer team, not making the play-offs for the first time since 2007. Entering the final two weekends of play, landing a spot in the top six was well within reach. But two straight ties to Acadia and UPEI put them in a must-win scenario in the final weekend, which they were unable to do against St. FX at home. Nonetheless, there is a great deal of optimism for the team moving forward, as only three players will be graduating this year. If they’re able to make the slight improvements necessary, these guys may have a much better chance once September rolls around.

The team’s defence constantly remained solid, or even better than that, throughout the season and was the reason the team had a chance to win the games. However, even though the offence looked A+ at times, the running game was almost non-existent and overall it was far too inconsistent. Special teams were atrocious, resulting in negative momentum swings and cost the team dearly in every loss. The coaching staff was knowledgeable, passionate and will continue to improve over time. But overall, it is a results-based game and even though the Tigers had a chance at winning every game, losing the final five games of the season is simply not acceptable.

You didn’t think we’d review the whole semester of athletics at Dalhousie without bringing up this little snidbit, right?

The suspension of both Dalhousie men’s rugby programs due to hazing allegations put the university on the national media map. The allegations arose following a complaint from a member of the university in regards to inappropriate actions taking place by rugby team members at an off campus party. It came just two years after Dal’s women’s hockey team was suspended for allegations of the same nature. Though the media frenzy didn’t last nearly as long as it did two years previous, it still had people talking. With university officials conducting themselves much more professionally this time around by following the new hazing policy put in place, it allowed the focus to be swayed from the university and back to the competing varsity teams.

But men’s rugby still receives the lowest grade due to the gravity of the implications. Yes, we are unsure of the particular details of the occurrences at the party. If the university has anything to do with it, we never will unless we personally know a team member who was in attendance. But we do know there was a party. And we do know there was enough of an indication that immature actions had transpired at that party.

And if you ask me, that’s reason enough to be given the lowest possible letter grade.