Putting the ‘student’ in student-athlete 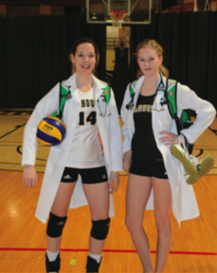 Haworth is a high jumper. Hudson, a volleyball player. Though their chosen sport is different, the two share a common bond. They both bleed black and gold, and they both aspire to become doctors.

Haworth and Hudson are entering their second semester of their first year of medical school at Dalhousie. They agree that it was a smooth transition from balancing school and athletics in their undergraduate degree to doing it in medical school.

“If you keep working hard the same way you did in undergrad,” said Hudson, “it’s a very easy transition.”

Hudson, a 23-year-old from Mississauga, Ont., completed her first degree at the University of Toronto, focusing on human biology, physiology and psychology. She immediately made the transition to the east coast upon graduating. Haworth, however, has been a Tiger since entering university. She completed her undergraduate degree in psychology. Currently, both Haworth and Hudson are interested in pursuing pediatrics, but they say they not set on a particular field just yet.

Haworth is one of the most decorated women’s high jumpers in Dal’s history.

She placed second at the Canadian Interuniversity Championships (CIS) last year, and in doing so, beat the Atlantic University Sport (AUS) record with her 1.82m jump. She placed third for team Canada at the North America, South America and Caribbean Championships in B.C. last summer, too. On top of that, she has taken home the AUS student-athlete community service award for the past two years for founding the Special Tigers Sports Program for children with intellectual disabilities.

Hudson played four years of varsity volleyball at the University of Toronto, where she won a gold medal and two bronzes in the Ontario University Athletics (OUA). She’s also won the U21 beach volleyball nationals in 2011 and competed in the International University Sport Federation (FISU) Games in Brazil.

Prior to applying to medical school, both Hudson and Haworth knew they wanted to continue to pursue their athletic careers, despite the hectic schedule.

“I’ve really enjoyed the experience so far,” says Hudson. “I really like having a busier scheduler, and I find you can actually accomplish more when you’re really on top of it.”

They both say they aren’t concerned with falling behind in their classes because they know their classmates will always be there to help.

“Our medical school classes are a little bit more of a family than I think our undergraduate classes were,” said Haworth. “The faculty is also pretty supportive of us keeping active outside of medical school, too.”

Despite having a heavier workload than their teammates, Hudson says her coach doesn’t treat her any differently.

“It’s all the same,” she said. “Our coach and coaching staff are really supportive of everybody. Everybody has tests and commitments that come up, and we just work with it.”

Haworth says with track being more of an individual sport, her coaches have been effective at making sure she keeps her overall goal in mind.

“At a point you reach a certain level of maturity, so I know if I skip a practice or put less weight on a bar, I know I’m only hindering myself.”

“When you’re trying to achieve highly in any aspect, you’re going to have days where it feels overwhelming,” she said. “But you have to remember that you’re doing it because you love it.”

Haworth says she’s been asked on several occasions if she was nervous going into the semester with several commitments on the go. However, she says the support from her family peers help keep her going.

“I knew we would be well supported in academics and athletics, and we have been.”