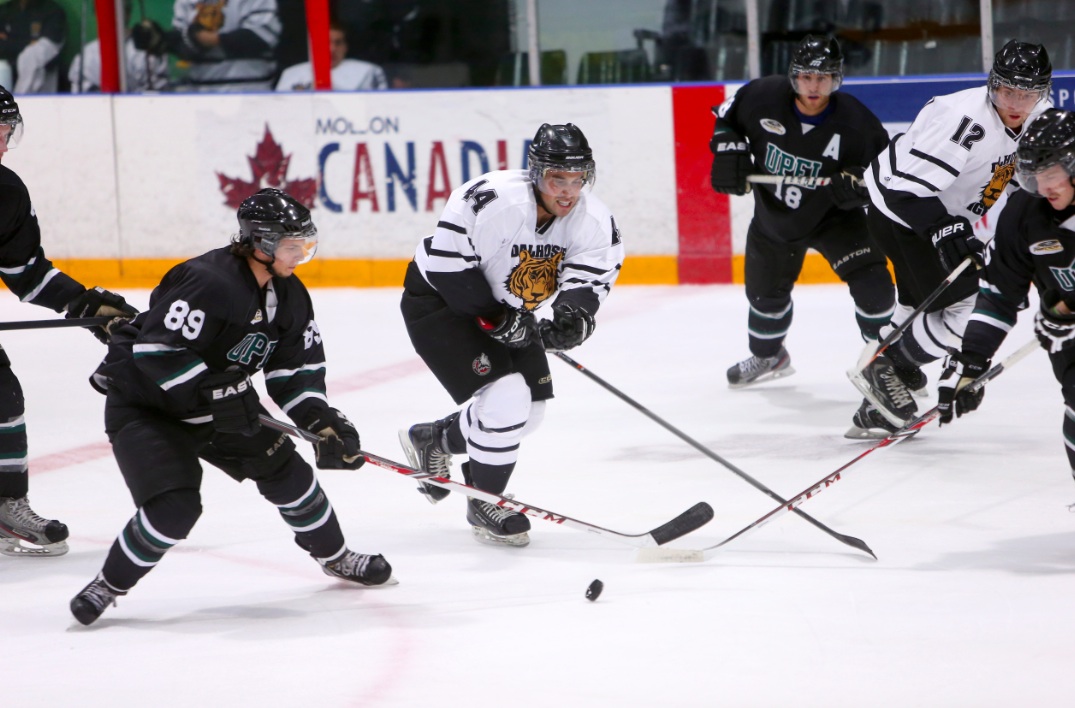 The men’s hockey season got off to an inauspicious start, dropping their opening games 5-1 and 4-3 to UPEI and St. Thomas University respectively.

The Tigers began their campaign at The Forum hosting the Canadian Interuniversity Sport (CIS) No. 6 Panthers. The scoring began with an unlucky break, after a pass intended for Ben MacAskill shattered the blade of his stick and led to a breakaway goal for UPEI. Tigers defenseman Matt English would later even the score with a one-timer from Brad McConnell, but UPEI would respond with a pair of goals in the second period.

“Our intensity dropped after those goals, and PEI was just a much better team the rest of the night,” says Tigers head coach Chris Donnelly.

The Panthers proceeded to overwhelm Dal, dominating possession and keeping pressure on Tigers goaltender Bobby Nadeau. Even with several power play opportunities, including a four-minute stretch of five-on-four after a UPEI high sticking penalty, Dal was unable to capitalize and subsequently surrendered two shorthanded goals.

Donnelly attributes his team’s shortcomings to the collective attitude on the ice. “I don’t think our mentality was in the right spot,” he says. “As a result we probably gave up more opportunities than we’d like to against PEI, but you know, full marks to them, they played hard all night.”

Despite the 5-1 loss the night before, the team responded with a resolute effort against the Tommies. However, special teams would spell defeat for the Tigers once again, with St. Thomas scoring three of their four goals with the man advantage.

The offence did begin to click, with forward Brett Theberge netting a pair and Patrick Daley scoring late in the final period to keep the game within one. Despite this late surge, the Tigers would proceed to drop their second regular season game in a row, and sixth game overall.

Adding to the Tigers’ struggles was the absence of captain Pierre Vandall due to injury concerns. He remains hopeful that he will be able to return for the team’s upcoming game on Oct. 25.

The captain remains cautiously optimistic about the Tigers, who head out on the road for their next four games.

“It’s work,” says Vandall about what his team needs to do to turn things around. “When things don’t go well, you work. And when they go well you keep working and everything will be fine after that.”