The new boys in town

Women’s rivals both replacing a Jordan at the helm 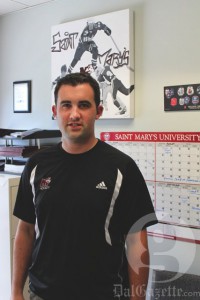 The two head coaches of varsity women’s hockey in Halifax are set to face off against one another Wednesday, Oct. 19, and each are in their first year calling the shots. For Dalhousie and Saint Mary’s, the two new bench bosses each have their own share of past turbulence.

Over at Dal, Sean Fraser has stepped up his involvement with the Tigers, rising to the top slot after spending six seasons in a support position. While Fraser has only signed a one-year contract as head coach, he is thinking long-term.

“We could be losing up to nine players next year, so we want to prepare for any growing pains.” Fraser is pleased his team has done well in the past, but says he is looking for better. “We were sitting at about .500. I’m looking to improve that record this year.” He described his past experience with the team as his main advantage in transitioning to the new role.

The Tigers finished fourth in the regular season last year. They had a 1 – 1 record at the AUS championships.

Fraser’s promotion this April comes in the wake of the team choosing to not renew the contract of previous head coach Lesley Jordan at the end of last season. She was on a one-year contract as well.

A press release detailing Fraser’s appointment describes his position as ‘interim head coach,’ leaving the question open as to whether he will remain in the position next year. 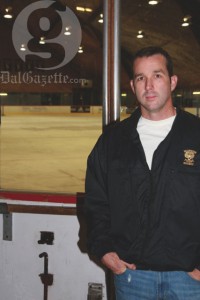 At Saint Mary’s, Chris Larade has also recently been hired as the head coach. He arrives to pick up a team that many thought was dead last spring. In March, the Saint Mary’s women’s hockey team had their funding cut entirely by the school’s athletics department, citing budget concerns, benching the team and riling students and alumni alike. The public outcry resulted in a protest rally, which only added to the national media coverage the team’s axing was receiving. During the resulting backlash, however, SMU secured a large sponsorship to save the team. It was during that period of uncertainty that Ryerson University scooped up the team’s former coach Lisa Jordan, twin sister of Dal’s Lesley.

Adding to the challenge of leading a new team, Larade explains it wasn’t just staff that drifted away from the team during the upheaval: “I’d say we lost probably five players, between recruits and players leaving from what happened.”

Not that he’s pessimistic, mind you. Larade feels it is all a building experience.

“I’d say what doesn’t kill you only makes you stronger.”

The last game between the two teams has presumably left the Tigers with the leg up. The Tigers dominated the Sept. 27 exhibition match, winning 8 – 1.

The upcoming faceoff between the two teams on Wednesday, Oct. 19 will be Saint Mary’s home opener. It takes place at 7 p.m. at SMU Alumni Arena. Dal’s first home game occurs Sunday, Oct. 23 at 2 p.m. against St. Thomas. It will be the Tigers third game of the season.