Ryer is made for running 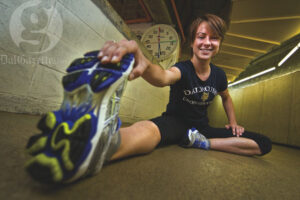 Ashley Ryer had her first race in eighth grade.

“I just did it for fun, but I started to get more competitive in my grade 12 year and it went from there,” she says. “Once you get in that environment, it’s addicting. You start to love it and it’s so much fun. It takes over.”

Currently taking a masters in health administration at Dal, Ryer previously graduated from Saint Mary’s where she came in 10th at nationals in her third year and was also team captain.

Now at Dal for her second campaign, this is Ryer’s last year of eligibility at the university level and she wants to make it count. After an injury left her with just three days of training before nationals last season, Ryer managed to place 44th. This year she aims once again for a top 10 finish.

Ryer says a full training season will be a big help as she fights for a strong result at nationals.

Ryer also notes the importance of the mental game.

“I think that’s what separates a really good athlete physically from a good athlete that is at a different level: it’s the mental toughness,” she says. “You can train, train, train until you’re blue in the face, but there is really that mental component to it.”

For Ryer, the start of the race is most challenging.

“You have so much energy and once the gun goes off you’re like, ‘OK, got to go.’ It’s about keeping yourself calm,” she says. “That really sets the tone. If you go out fast, you’re done. You really have to be conservative and once that point hits it’s about getting in the groove and just keep going.”

At the end of the race, Ryer is always relieved. “Everyone just accomplished something.” she says. “Before the race I’m really quiet; afterwards you can’t shut me up!”

Ryer also runs for Dal’s track and field team and explains the two sports are very distinct. There are no excuses for bad times in track.

As team captain for the women’s cross-country team, Ryer is looking out not just for herself, but her teammates.

“I want to make sure all their needs are being addressed, but also remain their teammate,” she says. “I don’t want to feel like their mother. I want them to be able to come to me with issues they have, but also be someone to kind of get them excited and pumped up for a race.”

The team aspect of cross-country is a big part of why Ryer loves it.

“We are always seeing each other. It’s so important that we have those good relationships,” she says, mentioning the team watches movies together on Fridays. “I don’t think we would function as well as we do if we didn’t have those connections and bonds.”

Another way the team spends time with each other is through yoga, a cross-training activity Ryer is an advocate of. She enjoys how calm it is.

“Running is so high energy and you have to be on your game, where in yoga you can relax.”