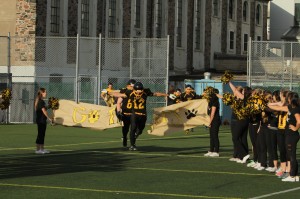 In a game full of mistakes for both teams, the Dalhousie Football Club managed to hold off a late UNB Red Bombers drive to seal a 31-25 win in their season opener.

Strong defense and a bit of luck helped the Tigers stave off a comeback to get their season off to a winning start in a game that saw a rouge, a blocked punt, clock malfunctions and lots of flags.

The win marked the first victory in the Alan Wetmore era, with the first year head coach happy to pick up a win in his debut, despite the sloppiness.

“It was a hectic few weeks,” he said after the game. “Getting the guys into camp and getting them ready for this week and it showed a little bit. But we made adjustments and I’m really proud of the team.”

“I’m very happy we won, it could have been cleaner but it’s been a heck of a two weeks with a first year staff trying to figure out our team and what we’re capable of.”

Dalhousie got off to a strong start with an interception by Jason Sobey on the Red Bombers first drive, the first of four interceptions by the Tigers defense in the game.

Tigers quarterback Matt Shannon quickly moved the team down field, before second year running back Adam Gallant punched in a one-yard run for a quick 7-0 lead.

The Tigers cranked up the pressure with two more interceptions in the quarter, but were unable to turn the defensive pressure into points and the Red Bombers capitalized on a late punt block, as Tyler Sturgeon ran in for a defensive touch down.

UNB took the opportunity to add pressure in the second quarter, adding a safety, rouge and a touchdown by Cody Stewart to take a 16-10 lead into halftime.

It turned from bad to worse for the Tigers in the second half as their opening kickoff was returned for a touchdown by the Red Bombers, which saw them start on their goal line to start the second half trailing 23-10.

The early touchdown served as a warning for the home side and the Tigers offence shook the rust off and woke up, with Shannon finding a rhythm and connecting with receiver Brandon Steeves for a 50-yard touchdown reception.

Penalties in the fourth quarter saw the Tigers ending up conceding a safety and setting the Red Bombers up with the ball trailing 31-25 with just two minutes left in the game.

With the added pressure, UNB’s offence faltered and picked up a slew of penalties, pushing them deep into their own end and turning the ball back over to the Tigers with seconds left on the clock.

Looking to the future, coach Wetmore was pleased with the performance and insisted the team needed to focus on special teams and making adjustments on both sides of the ball.

“The players showed great backbone and the coaches made the adjustments in the second half that needed to be made. Sure we could have played better, but we’ll clean that up and get ready for the next game,” said Wetmore.

The Tigers now head on the road for their next two games to play both UNB Saint John and Holland College, before their Pinktoberfest game aginst UNB Saint John at Wickwire Memorial Field on Oct. 4.