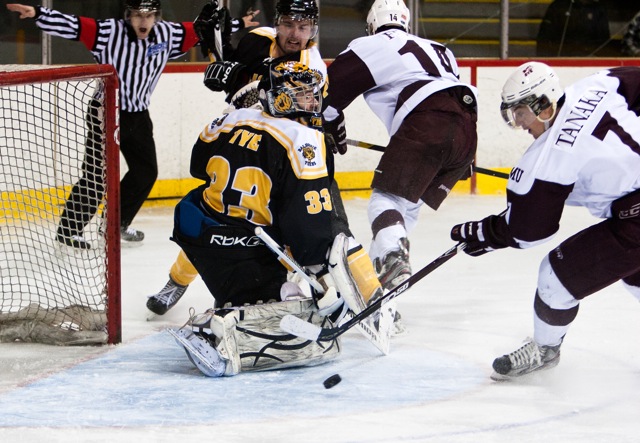 Cory Tanaka scores for the Huskies early in the 3rd in a Jan. 20 game. Photo by Martina Marien

A last-minute comeback was not enough for Dalhousie men’s hockey team, who fell 6 – 4 against cross-town rivals Saint Mary’s Huskies at the Halifax Forum Jan. 21.

The Tigers remain just one point outside a playoff spot after the team they are chasing, St. FX, lost both of its games this past weekend.

SMU forward Justin Wallingford had two goals and an assist in the victory. Pierre-Alexandre Vandall, Jacob Johnston and Benjamin Breault each scored for Dal.

In spite of a strong start, the Tigers dug themselves into a 5 – 2 hole to begin the third. A power play goal by Chris MacKinnon just 2:23 into the period increased the deficit. Two more by Dal would close the gap, making things interesting, but the final would remain 6 – 4.

For an extended recap of the game, check the Jan. 27 edition of the Dalhousie Gazette.