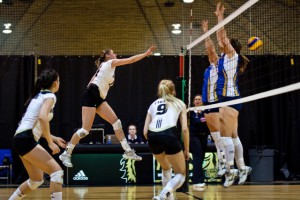 Player of the game Louise Facca punches the ball past | Moncton's blockers. Photo by Pau Balite

The Dalhousie women’s volleyball team has a two-game winning streak going into their rescheduled match against Acadia Jan. 25.

After losing the first set 25 – 21, the Tigers were able to rally back and win the next three sets for a 3 – 1 victory over the Aigles Bleus Jan. 22. The win temporarily moves the Tigers past Cape Breton to second place in the AUS standings.

Conference first team all-star Louise Facca was named player of the game with 20 kills, 48 total attempts and a .208 hitting percentage.

The Tigers take on the 3 – 7 Acadia Axewomen at the Dalplex Jan. 25 at 7 p.m. The match was originally scheduled for the Friday before but was cancelled due to inclement weather.

For an extended recap of the game, check the Jan. 27 edition of the Dalhousie Gazette.