Tigers likely to suit up at Forum, Metro Centre 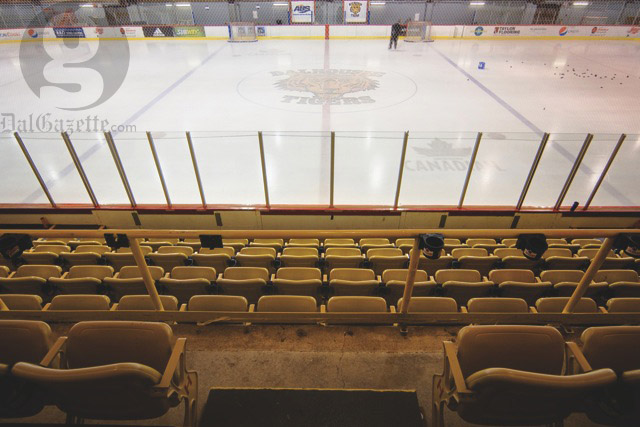 The last game will be played at Memorial Arena this April. Photo by Pau Balite

Dalhousie’s hockey teams, it appears, will not just make the fabled Halifax Forum their home rink for the next few years, but they will also share space at the city’s biggest arena as well.

Rumblings about Dal transferring their on-ice programs to the Forum were heard as soon as the announcement to tear down Memorial Arena due to the construction of a nearby mixed-use facility was made Nov. 29. But, it now seems likely that while the men’s team is at the Forum, the women will play their league games at the Metro Centre.

The Tigers are expected to return to campus in about four years once a new arena is constructed.

Dal athletic director John MacDonald told the Gazette in an interview last week no formal agreement for the school to become a short-term tenant at either arena has been confirmed, although he said the deals should be finalized shortly. MacDonald added that Dal has an “agreement in principle” to hold a majority of its ice times at the Forum.

“They have times,” said MacDonald, in reference to the two ice surfaces at the Halifax Forum Complex. “I sat down the other day with their GM and they laid the schedules out for the Forum and Civil arenas and said, ‘Where does Dal fit into these boxes?’ And we’re fitting in.”

Krista Cross, Dal’s senior manager of marketing, said the worry that there isn’t enough ice for Dal’s varsity hockey programs is not necessary.

“At the moment, it’s not about having time, it’s about having a good time. We want to make sure that we’re considering that they’re student-athletes first and they can’t be out until 2 a.m. We have to make sure there are appropriate times for our practices.”

Al Driscoll, general manager of the Halifax Forum Community Association, said it is not possible for the Forum to be Dal’s only arena.

“There’s not a chance that we can accommodate all the ice that Dalhousie uses at their own rink,” he said.

“We have existing tenants who are long-term who are going to be here long after Dal leaves and builds their new rink, so they remain our top priority. At the same time, you want to be a help. Hopefully we can help Dal out.”

Driscoll speculated the men’s hockey team will probably be playing at the Forum because of the greater likelihood of receiving lucrative time-slots like Friday and Saturday night. As a result, the women’s team would be relegated to the Metro Centre where their requests will fall below the QMJHL’s Mooseheads, NBL’s Rainmen and numerous concerts in the pecking order.

A Trade Centre Limited media representative declined to comment on the possibility of Dal’s women’s team playing at the Metro Centre, although she admitted those discussions have been taking place.

If Dal’s men’s team indeed plays at the Forum, they will join their cross-town rivals at Saint Mary’s as two AUS programs at the same home rink. The Huskies made themselves at home at the Forum beginning in the 2003-04 season.

Steve Sarty, Saint Mary’s athletic director, believes the change will take some getting used to.

Although distance from campus to these new arenas is an issue, MacDonald says that it should not be a big concern, especially in regards to attendance. He says many students already live in the area, and the arenas are only about 10 minutes away from campus by bus. MacDonald also suggested a shuttle service to bring not just players to and from games, but fans as well. It might make coming to a game an event.

“We’ve already started discussions with the AUS and Saint Mary’s to kind of get together on this and really try to promote the Forum as the hotbed for AUS hockey in Halifax,” MacDonald said. “The Metro Centre is thrilled to look at some opportunities there as well with regards to other things like doing double-header hockey and looking at ways that we can work together with the Rainmen or whatever to really boost that event experience.”