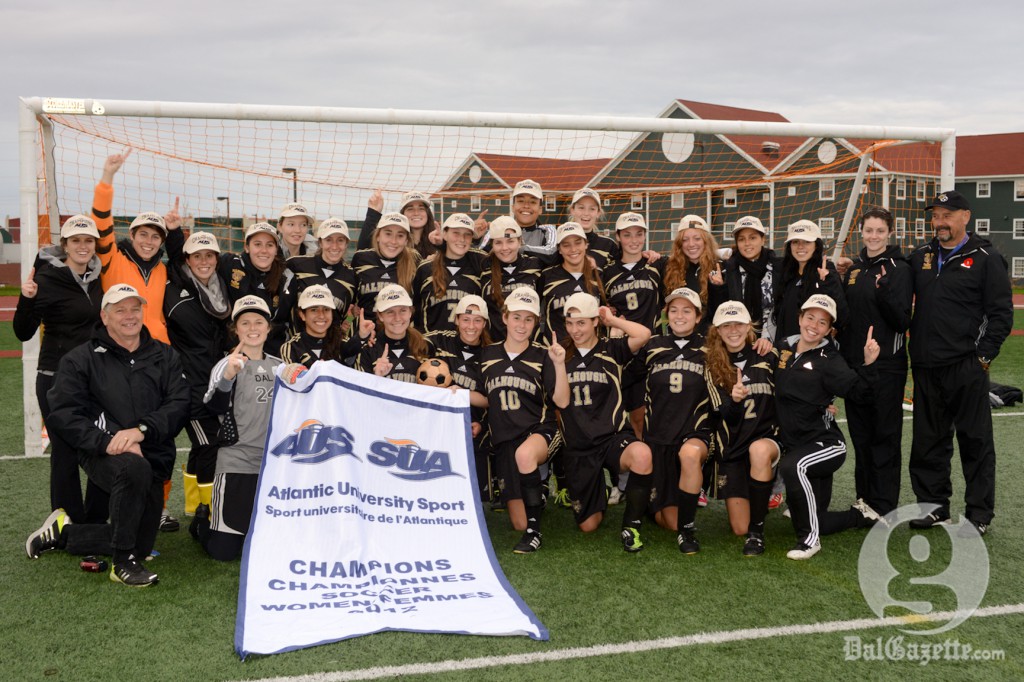 The pennant is Dal’s for a second straight year. (Vaughan Merchant photo, CBU)

A wild finish to the game saw the Tigers run out as 3-1 winners in front of a stunned Orange Army that watched their team suffer their first loss of the season.

While some around the AUS may have seen last year’s title as a fluke, head coach Jack Hutchison sees this victory and the eight-game winning streak they closed the regular season on as vindication for the hard work they have put in.

“Last year people saw 11 new players in our squad and some may have thought we got lucky,” he says.

“To win again and claim the banner, it says a lot about our program and the group of players we have, and shows what we’re doing is for real.”

This title marks the school’s 12th championship, the highest total in the league.

The Tigers were powered to the win on the back of a two-goal performance by Daphne Wallace, while their defence stood tall to deny the constant attack of the desperate Capers.

Wallace opened the scoring in the 21st minute, cutting past a defender to blast a shot past an outstretched Amanda Budden.

But the hosts wouldn’t take long to reply. Cape Breton defender Allison Bell-Davies answered back, shooting over Dal keeper Taryn McKenna on a long run to draw the teams level.

In the second half the Capers came out hard, with AUS rookie of the year Chelsea Currie seeing a number of chances to push her team ahead.

It was the Tigers who would score next, though. A goal by substitute Beth O’Reilly bounced over a defender and past Budden for the 2-1 lead.

With the Capers battling hard in the final moments, Dal’s Doriana Homerski was sent in alone on Budden. But the Irish keeper left her penalty box to challenge the attacker, deliberately getting a hand on the Tigers’ shot and she was shown a red card in return.

Now down to 10 players, the Capers’ luck went from bad to worse. The ensuing free kick from Wallace beat backup Tiffany O’Donnell to give the Tigers a 3-1 lead with seconds left in the game.

The third goal was the icing on the cake and put the game out of reach. The jubilation was clear on the faces of the Tigers, as they knew they were seconds away from winning back-to-back titles.

“When it’s 2-1, it’s nice, but when you put the third one in, as the girls say, ‘it crushes dreams,’ so we knew when that went in it relaxes us so we don’t do anything crazy in the final moments,” says Hutchison.

Wallace was named player of the game, standing out for Dal with three goals in two playoff games.

A quick turnaround awaits the Tigers, with the team having flown out Tuesday for the CIS championship, but Hutchison says the team learned all they needed at last year’s tournament.

“Looking back we lost in a span of five minutes and 16 seconds and I will never forget that. They scored three in a matter of minutes, so that’s the experience we take with us this year and hopefully we put ourselves in a better position to win,” says Hutchison, recalling Dal’s stumble last season to the Ottawa Gee-Gees.

Tigers captain and league MVP Rieka Santilli echoed the same sentiment. “We were close last year and lost our focus for five minutes at nationals. I think we learned a lot from that in playing Ottawa to a close score.

“We’ve got a great group of girls. If we play to our strengths then we can go far.”

Before qualifying for a spot in the championship game, Dal fended off UPEI in a tight semifinal last Saturday. Wallace scored the only goal necessary in the Tigers’ 1-0 victory.