Africville: the untold story through a poet’s eyes

Dalhousie University professor Shauntay Grant wrote her latest book on the history of Africville, but there’s a twist. This isn’t your typical research book; it’s a book targeted at teaching children about the community of Africville.

Grant, a Nova Scotian writer and assistant professor in the Dal English department wrote her new book about a young girl who goes to visit the historic town of Africville. As the girl walks through the site, she recalls the stories that her family has told her about their happy memories living in Africville. 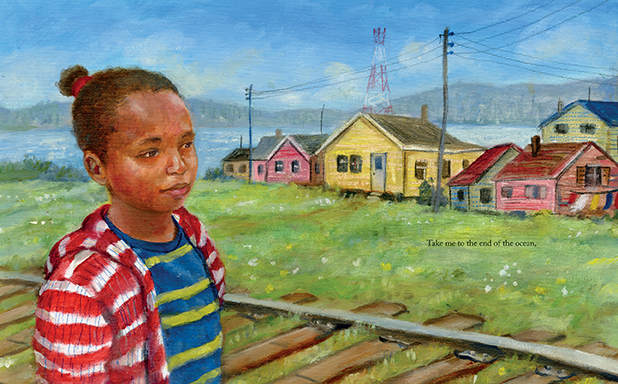 Entering a world of writing

Grant got into children’s writing somewhat by accident. Years ago, she was invited to read a poem at an event held by the Writers Federation of Nova Scotia. By chance, the senior editor of Nimbus Publishing was in the crowd; after hearing Grant’s poem, the editor told her that it should be made into a children’s book.

“A few years after that, my first picture book – a poem – was published,” Grant says. “It was based on the text of that poem that I had written when I was 18.”

Poetry and children’s writing aren’t the only forms Grant writes in. She makes music, performs spoken word and even has a play about two brothers living in a rural Black community in Nova Scotia. The play is with 2b theatre company and debuts in 2019.

Although Grant writes in many forms, she says there is a common thread that ties her work together.

“No matter what genre I’m writing in, I’m a poet,” she says.

Most of Grant’s children’s books are based on poems that she wrote. Africville is based on a poem that she penned at the Africville site when she visited the museum one summer. But this poem did go through some changes before being published as text in the book.

Before finalizing the text and pictures, Grant asked her publisher if she could show the draft of the book to former Africville residents.

“That process was just amazing,” says Grant. “Here I have people who actually lived there in this place with eyes on this work, and I’m asking them, ‘Did we get it right? Is this Africville as you remember it? Does this text represent the community?’ That was a really important piece for me, and it was really affirming hearing their response.”

After this process, Grant and her illustrator, Eva Campbell, had to tweak some details to accurately represent the town as it was remembered by its residents. But that did not bother Grant.

“It was a great experience, and ultimately made a better book.”

Grant hopes that her book will be used as an education tool for a child audience.

“Teachers tell me all the time how their kids are studying Africville,” she says. “And the resources they’re using are for adults.”

Grant hopes her book can change that. She’s glad to contribute something to the literature on Africville. Only a handful of books on the topic have been written for children. Grant also wants her readers to know the side of the story that’s never really been told.

“Truth has multiple sides,” she said, “and unfortunately with Africville, oftentimes we just hear one side of that history. There’s a real strong focus on the razing of the community and the relocation of residents and all of these unwanted services, which is part of it for sure. I’m certainly not suggesting that shouldn’t be mentioned, but it’s not the whole story.”

The history of Africville is often seen as a dark and shameful part of Nova Scotia’s history. The terrible treatment of the town’s residents is a point of guilt and shame for the Halifax government and people. Grant didn’t want children to see Africville in only a negative context.

“I really wanted them to get that feeling of Africville as a home, as a site of happy memories.”

Grant’s book celebrates Africville in a way it has rarely been seen before: a place of happiness.

“We’re talking about a community that was in existence on that site for over 150 years. And in those 150 years, so many things were cultivated – family, food, love. There’s just so much to celebrate.”