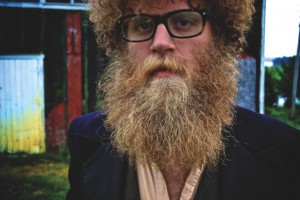 Ben Caplan’s album was actually done a year and a half ago. A release date came and went, and In the Time of the Great Remembering remained unreleased. It wasn’t until Oct. 20 that Ben Caplan & the Casual Smokers got to celebrate the release of their inaugural full-length album at last, with a party smack in the middle of the Halifax Pop Explosion.

It isn’t surprising when Caplan says he feels amazing and sounds like he means it. He’s had a long time to tinker with an almost-finished project.

“Relieved is a good word for it,” he says.

Now all he needs to do is tour. He’ll be performing with Charlotte Cornfield beginning Nov. 3 in Yarmouth and continuing on to Sydney, Antigonish and New Brunswick. She’ll be on drums, but also has her own thing going on: her new album, Two Horses, which shared a release party with In the Time of the Great Remembering.

Caplan has always worked with an ever-changing group of musicians, something he says he’ll continue to do.

Working on a full-length album was a new sort of project for Caplan. The group’s only other release is a namesake live recording. It was done in 2008 inside the chapel at King’s. During the performance, one of the microphones failed and the recording couldn’t be mixed. It wasn’t even meant to be released, but by virtue of the chapel’s acoustics, it sounded great.

But you can’t make an album by happy mistake. Working on an album meant having the power to go back and edit, and that brought with it pressure to be perfect.

“Every note was considered,” Caplan says a couple of times. “I didn’t feel like I had to make any sacrifices.”

The result is a polished album that still sounds intimate. Caplan’s voice lends power and gravity to his songs. There is no shortage of tracks you could dance to in bars, and the album often sounds unmistakably like its Nova Scotian roots.

The album’s slowest melodies are also its sweetest and most contagious; “Seed of Love” and “Drift Apart” grab your attention and stay in your head.

You can hear Tom Waits’ influence in the queasy melodies of tracks like “Conduit.” The songs have some of Waits’ mood, if not his lyricism, when Caplan’s voice descends into a growly whisper.

In the Time of the Great Remembering is easy to like. It doesn’t take many listens to get to know it and have bits and pieces of Caplan’s gruffly romantic songs stuck in your head.