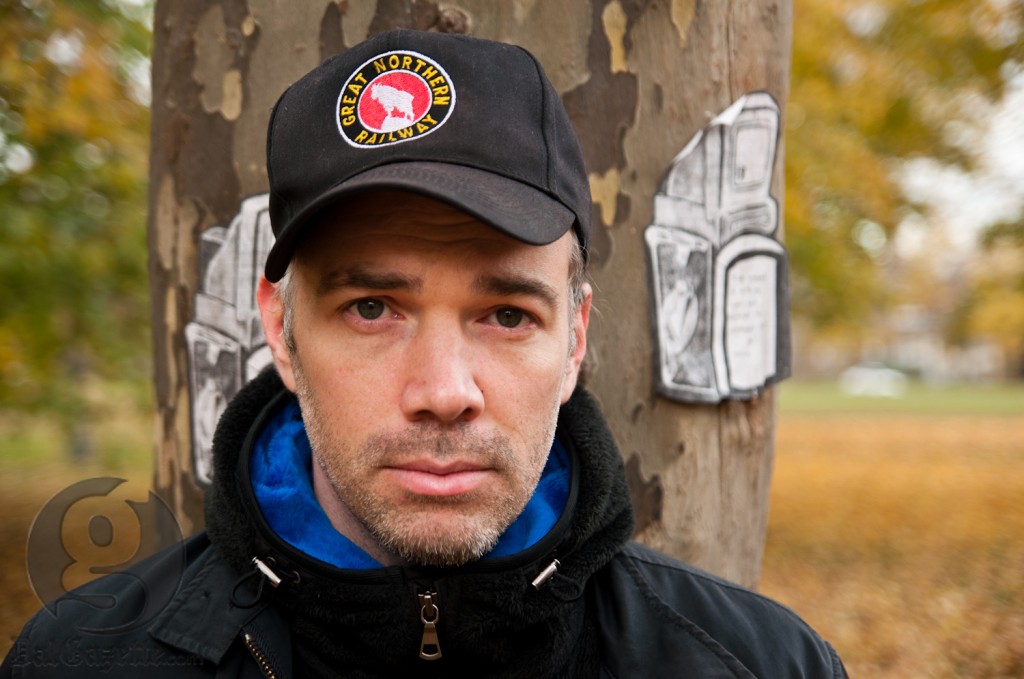 He's dancing underneath his face. (Photo supplied by Ryan Couldrey)

Rich Terfry, better known as Buck 65, is an internationally renowned Canadian hip hop artist and host of CBC Radio 2’s show “Drive.” He is currently working a new studio album and will be touring Europe in November. On Sept. 22 he played Granville Mall and took a small break from song writing to answer a few questions:

DG: What can fans expect from the album you are currently working on?

RT: This is, I think it’s safe to say, a breakup kind of record. The breakup in question was a particularly difficult one—to the point where it was almost insane at times. There are a few songs that aren’t just the regular old breakup songs. There are songs that kind of investigate some of the other wild emotions that a person will go through and some of these songs ended up coming out sounding kind of silly.

DG: Like “setting fire to the rain” kind of silly?

RT: Yeah, and in some cases even sillier than that, when you are at a time in your life when your emotions are all out of whack, sometimes your behaviour…or the things you’re thinking about can just go all over the place. All in all it’s pretty heavy…I think there are definitely a few songs that will rip people’s guts out.

DG: What are some of the influences you are using to create the new songs?

RT: I don’t think there are any influences on this record at all. This is really the first interview I have done since I started working on this new record so I am glad you asked. I’m thinking, “Hey, wait a minute, I haven’t really been referring to anybody or turning to anybody for inspiration, this is all just coming from inside me,” and that might be a first.

DG: Your last album, 20 Odd Years, had you collaborating with a lot of very talented Canadian artists from different genres, how did you find that experience?

RT: I knew I wanted to make a more melodic record than I had ever made before and I knew that the most powerful source of melody is that that comes from the human voice, ala singing, but I’m not the greatest singer in the world. I toyed and experimented a little with the idea of using auto tune or something like that, but it just didn’t feel like me at all. So I thought, “I’m just going to have to accept help with this,” and I turned to friends of mine that are good singers and got them to help out.

DG: Do you think it is especially important for Canadian artists to support one another in order to strengthen Canadian music culture?

RT: The fact that we don’t have a very strong musical identity in this country—which I actually think is a strength, I wouldn’t want that to sound like it’s a negative—means that everything is on limits for most Canadian musicians. I think that makes [Canadian musicians] very open to collaboration.”

DG: I am a big fan of your collaboration with Old Man Luedecke on “Indestructible Sam.”

RT: Oh yeah, thanks! That is one of those songs that came along and instantly became a fixture in my live set and—it’s kind of amazing—from the very first time I encountered Old Man Luedecke, even though we’re coming at things from two very different roads, I really felt a kinship with that guy.

DG: With recent cuts to CBC, what do you think the impact will be on Canadian culture and our ability to access Canadian content?

RT: There are things that CBC does that nobody else does that they won’t be able to do anymore, which is a huge shame, potentially. Basically, what you have is an organization that employs a bunch of people who work very hard every day to figure out every possible way they can help make Canadian music available to the public—to champion it. Every time there are cuts, there are programs, platforms and jobs that just go away, which means that there’s some musician out there that maybe had a platform before, who now doesn’t.

DG: Do you see the cuts as an opportunity for our community radio stations, such as CKDU, to step up and fill the gap?

RT: Absolutely…I hope people are now realizing that there’s a really important place for [community radio] and that there’s a service being provided there that can’t really be replicated anywhere else. For so many musicians out there, Canadian and otherwise, it’s basically the only home for them. When I worked at CKDU in Halifax like 20 years ago [giving a wide range of people a voice] was something CKDU prided itself on.

DG: In your opinion, what is the value of community supported independent radio to Canadian artists and music enthusiasts from your own personal experience?

RT: The thing that comes to mind for me goes back to before I worked at CKDU to when I was just a listener. There were some things that I was interested in, kinds of music I was interested in and when I was able to find not only that music but a community around it at CKDU it quite literally changed my life.

DG: You are playing NSCAD’s Back to School Special this weekend, the proceeds of which go to support NSCAD. Were you drawn to doing this show in order to help out the school?

RT: Yeah 100 per cent! The fact that there is an arts school in Halifax and that it attracts a certain kind of creative person reflects on the city. Walking down the streets of Halifax would feel different if the art school wasn’t there. Even with the amount of bands that came out of Halifax that originated at NSCAD in one way or another—in my experience, going back 20 years ago, some of the biggest bands that ever came out of Halifax, like Sloan, had a strong NSCAD connection. The thought of Halifax losing NSCAD is just a catastrophic thing to consider and so if there is something I can do to help out with that fight and help the school just stick around and stay strong.