When news broke on Oct. 18 of Tragically Hip singer Gord Downie’s death, a public vigil had formed beside a liquor store.

There was a newly-unveiled mural of the singer, appearing as he did in one of the band’s final shows – focused, confident, and brilliant as he wore a technicolour suit and white stetson. Painted next to him was a line from one of the band’s best known songs, ‘Ahead by a Century.’

Around 30 people were there who just wanted to look at the mural and think about the memories that the man it depicts had brought them. On the ground, there were over 100 bouquets of flowers.

When cars drove by, all you could hear was the faint sound of Tragically Hip songs playing off the car stereo. The rock radio stations in town were well into a Hip marathon to commemorate the life of a man who had given people so much. Staff from the station later pulled up to the mural to lay flowers themselves, where a woman approached the car and thanked the station for introducing her to Downie and the Hip so many years ago.

No dress rehearsal, this is our life, the mural reads.

This could have been a typical scene in any Canadian city.

Only this happened south of the border in Buffalo, N.Y.

In the days following Downie’s death and when it was announced that he was diagnosed with terminal brain cancer, much has been written on Tragically Hip being “Canada’s Band” thanks to Downie often taken inspiration from this country.

Most if not all the pieces neglected to mention that the Hip has a legion fanbase in a border city only four hours away from the band’s hometown of Kingston.

Due to proximity, Buffalo residents were able to listen to Canadian radio in their cars and homes. So when the Tragically Hip started getting attention from Canadian rock radio with singles ‘New Orleans in Sinking,’ ‘Blow at High Dough,’ and ‘Little Pistols,’ Buffalo audiences were listening.

“Anywhere American towns are getting Canadian stations, the fervour is there,” said Jeremy Hoyle, lead singer of the a Tragically Hip tribute band in Buffalo.

He first heard the Tragically Hip at 18 by listening to CFNY-Toronto, now 102.1 The Edge, and through word of mouth. At the time, Hoyle was in a band with a German exchange student who played him a copy of Up to Here, the Hip’s debut album.

Instantly smitten, Hoyle decided to check out the Hip when they played a show in Buffalo the following week.

“When you see them live, it’s like, holy shit.”

The Tragically Hip has visited Buffalo over a dozen times throughout the years, said Town Ballroom owner Donny Kutzbach. In fact, Kutzbach says that Buffalo was one of the biggest markets for the Hip and could draw audiences as large as those in Toronto and Vancouver.

“They were superstars as much here as Canada,” Kutzbach said.

Paying tribute through music and art

Even when Buffalo can’t get the real thing, Hoyle’s band The Strictly Hip is a major attraction in the town. The band performed with the Buffalo Philharmonic Orchestra this summer and managed to draw 11,000 people.

Kutzbach tried to get the band to come to Buffalo for their final tour, but because of Gord’s medical issues, it couldn’t happen.

Instead, when the band stopped in Toronto, London, and Hamilton, people flocked to those cities to catch the band one final time.

“You made a pilgrimage,” Kutzbach said. “You couldn’t not be there on this last burn.”

Buffalo claimed the Tragically Hip as much as Canada did during the final days. This past September, Rory Allen was commissioned to complete a mural in the city’s commercial district. A massive Tragically Hip fan, Allen knew exactly what he wanted to do.

“Gord Downie in concert, mid-song, on his last tour,” he said. There was some pushback from city council, but after generating some buzz, Buffalo fans rallied behind Allen to complete the mural. 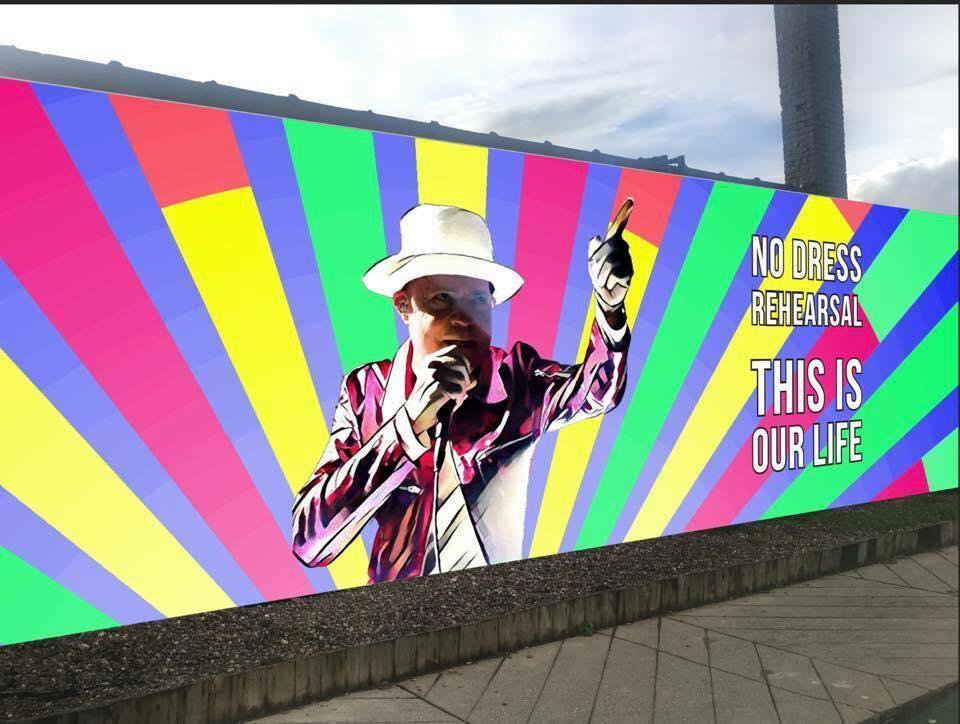 The mural, painted on the side of Hertel Liquor Library, is the third is a series of community paintings.

Once the mural was finished, Allen even got approval from one of Downie’s brothers.

“It’s a great testimony how much that band meant to the people in Western New York,” Kutzbach said.

Even though songs such as ‘Nautical Disaster’, ‘Wheat Kings’, and ‘Bobcaygeon’ are now considered to be enshrined poetic narratives about Canadian life, their meanings have transcended beyond borders and national identity.

“You don’t have to have been to Bobcaygeon to know what he’s talking about,” Hoyle said.

Now, with Downie’s passing, many Tragically Hip songs will be buoyed with more emotional weight than ever before, especially for a city that didn’t get a proper chance to say goodbye.

Waking up to bad news

On Oct. 18, Kutzbach woke up frustrated. His phone’s buzzing disrupted his sleep and he suspected that it was just friends in a group message thread.

“I realized it was 10 to 15 different people saying the same thing: Gord’s gone,” he said.

Immediately, Kutzbach’s establishment The Town Ballroom offered a tribute of their own – posting a picture of Downie on Instagram during one of his final performances with the Hip, similar to the one used for the mural.

Later, Kutzbach realized that he had woken up like this when it was announced that Downie had terminal brain cancer.

“It was just not great days,” he said.

But the music, mural, and memories live on.

Fans gathered near the mural, took photos, and introduced their children to the Tragically Hip that day. People talked about the shows, including the infamous concert that was stopped by a massive thunderstorm. But in typical Hip fashion, they played a make-up show for a city that has shown them so much support throughout the years.

“I don’t know if we understand how incredible it is yet,” Hoyle said. “It’s like folklore. The band’s magical.”