Recognition for people of colour and women in Hollywood

Hollywood awards season is in full swing. For the past few years, award shows have been highly criticized for their lack of gender and racial diversity. But this year, things are changing.

For this year’s Golden Globes, however, seven out of the ten movies nominated in the best picture categories (best drama and best musical or comedy) have non-white actors in major roles. Four out of those ten films also have non-white directors.

Kelly Sit, a second-year student at Dalhousie, believes that this increasing representation of people of colour is a good sign for the future.

“It’s definitely something monumental to be able to see [racial diversity] on the big screen,” says Sit, “filmmakers now recognize that there is that demand for such films that represent marginalized groups, and I think because of that, they will make more.”

In its most recent Hollywood Diversity Report, the University of California, Los Angeles found that in the top 200 theatrical films released in 2016, the movies with the highest median global box office receipts and highest median return on investment had 21 to 30 per cent minority actors cast. (Editors note: the Hollywood Diversity Report doesn’t define who is included within the category ‘minority,’ but it does appear to include all genders and racial groups that are not male or white.) The films with the most racially and ethnically homogenous casts, on the other hand, did the worst in the box-office.

With stats like these and the immense success of recent films like Crazy Rich Asians and Black Panther, it seems obvious that studios will continue to make racially diverse movies in the near future. But that isn’t a certainty.

Diversity trends have happened before.

From left to right: Constance Wu, Henry Golding and Gemma Chan. The Crazy Rich Asians stars play “Never Have I Ever” in an MTV International video on YouTube. Creative Commons.

In the early 90s, there were many films made with ground-breaking racially diverse casts and progressive stories. In 1993, The Joy Luck Club was the first Hollywood film made with an all Asian cast. Thelma and Louise also came out in 1992 and has since become a feminist cult classic.

But only in recent years have similar kinds of representation appeared again in mainstream Hollywood.

Racial and gender diversity in award shows fluctuates with these trends. At the 2007 Oscars, a record-breaking seven actors of colour were nominated for awards. But it took until 2017 for that record to be matched again. Last year, Greta Gerwig became only the fifth woman in 91 years to be nominated for best director at the Oscars. 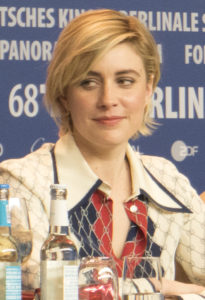 Greta Gerwig was nominated for Best Director and Best Original Screenplay for Lady Bird (2017) at the 2018 Academy Awards. Creative Commons.

Is the current increasing recognition of marginalized groups just another diversity fad? Emily Shaw, a fine arts student at Mount Allison University, says when it comes to gender diversity, it’s the talent of women filmmakers that gets them recognized, not just societal trends.

“I think it is more attention and general awareness of these [gender] issues from both audiences and people within the film industry that are pushing these women further into the spotlight,” says Shaw. “Though I don’t personally believe having more women nominated is the result of a pity vote.”

There’s still a long way to go for representation of marginalized people. By 2050, it’s estimated that racial minorities will outnumber white Americans; but Hollywood is nowhere near that kind of proportional representation. From 2011 to 2016, 91.9 per cent of the industry’s top films were written by white people.

And, diversity in Hollywood and its award shows is still largely focused on race and sex.

There is a plethora of other marginalized groups who’ve yet to have their voices seriously heard in mainstream Hollywood, such as those who are gender non-conforming, and people with disabilities.

In a 2018 interview with ABC News, non-binary actor Asia Kate Dillon spoke about the importance of representation of gender non-conforming people.

“Sometimes you have to see the thing to know that it exists,” they said. Dillon’s role in the Showtime series Billions is the first non-binary character on American TV.

Whether or not this increasing representation of minorities continues in the near future, at the end of the day, Hollywood and its award shows are a business. If people want diverse representation on screen, they’ll need to pull out their wallets and pay for the movie ticket to see it.