On The Road: Bus Edition 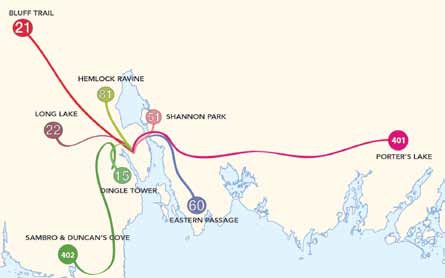 Halifax’s transit system extends far beyond the downtown, into such places as the darkest Tantallon, deepest Eastern Passage and the charming Long Lake. Easy as it is to complain about the public transit in this city, it still covers quite a bit of ground. Some of the routes aren’t as interesting as others, of course, so it is important to know which buses are worth taking, and which end in dead ends or strip malls.

Routes whose downtown segments are well-frequented, such as the 81, are still relatively obscure at their farthest points. The 81 travels past the bridges, through the industrial part of town, which is perhaps why many choose not to take it very far, and on through various communities until the end of the route just before Fernleigh. Its partner for much of the route, the 80, also goes past Bayers Lake towards distant parts of the city, passing Mount St Vincent University and along the Bedford Basin, all the way to Sackville. It may not be an exciting destination, but it is a long route with much to see and many transfer points to other buses—including, at the end, the 83, a bus which seems on the map provided by halifax.ca/metrotransit to disappear off the edge along provincial highway 1.

There are beautiful, unspoiled places not far from the city, and requiring no transport of one’s own to get to them. One of these is Long Lake, the trail served by the 22. Despite being a mere half-hour out of the city by bus, it is a peaceful spot, not completely undisturbed—which isn’t possible so close to the city—but very pleasant all the same. The 22 leaves from the Mumford terminal, and travels south-west, then straight south toward Ragged Lake Industrial Park, a destination that one could be forgiven for thinking the least interesting place in the city. However, it is not the final destination of this bus that holds the appeal, but rather the stop, on a nondescript bit of highway with a parking lot beside it, leading to the Long Lake trailhead. The area is popular, especially with dog owners, who enjoy the freedom of the woods with their pets as opposed to designated trails in the city parks.

The 15 also takes a long, winding, and eventually interesting route. In one direction, it travels towards Armdale, providing access to the waterside park on that side of the Northwest Arm. This is a gem of a place, and while the woods aren’t quite thick enough to get lost in, the Dingle Tower is worth visiting for the name alone-not to mention the lions guarding the entrance. It’s still emphatically a city park, unlike Long Lake’s comfortably unkempt trails, but it’s one of the best places to see the colours change in fall. Further on, the 15 heads to Eastern Passage, along Purcell’s Cove Road. Not far away, the 20 ends its route in Herring Cove. The area contains the Purcell’s Cove Conservation Lands, easily accessed by the road and containing a hiking trail.

The 402 accesses Duncan’s Cove and Sambro and can be boarded in Spryfield. On the Dartmouth side, route 66 leads to the park around Frenchman’s Lake and route 56 goes to Shubie Park, beside Lake Micmac. Route 401 reaches Porter’s Lake.

This weekend, I will be going backpacking on Bluff Trail, a breathtaking area according to the website and entirely accessible by city bus 21, which one can connect to via the number 18.

Two bi-planes, one white and one black, duck and twirl through curtains of maritime fog—a dog-fight over Princess Margaret Boulevard. A couple of guys steer the aerial models from fold-out lawn chairs stuck in the soggy turf of Shannon Park’s soccer field. The only other person around, aside from the model plane pilots, is a groundskeeper mowing the lawn in front of the French immersion, his ears covered with orange headphones.

Across the street from the soccer field is a sprawling set of apartment complexes that sit empty behind a chain-link fence, the stocky, graphic blocks painted in autumnal shades that haven’t been touched since the days of disco. Kids grew up in these apartments not too long ago, navy brats who peered from the windows, swam in the swimming pool. Everything is boarded up now, the corrugated siding marked with scribbled tags and bombs. To slip past the fence is a federal crime.

The community of Shannon Park was closed in 2004 and it has sat behind the fence for almost a decade, a piece of central HRM made silent. It’s like staring into another place, another time. The crumbling buildings would be more at home in Chernobyl’s Zone of Exclusion than in Dartmouth. It’s strange, seeing the buzz of activity—the bi-planes, the school, traffic rumbling down the MacKay Bridge to the highway—continue around those empty windows, sinister and sad.

#60 Eastern Passage
It’s somewhere between Five Corners and John’s Lunch that the persistent and inexplicable scent of acrid sausage and wintergreen mouthwash wafting through the bus starts to make my eyes prickle, and the mouth of the harbour is still half an hour away.

After the lengthy and odoriferous ride, I get to MacCormack’s Beach, a small, scrappy seaside park curled at the edge of the Atlantic. This is not a California white sands beach. Litter, unidentifiable plastic objects, tampon casings (known to locals as “beach whistles”) and part of a sofa are washed up on the shore, but the view is incredible. The ocean goes on so far into the distance that the line between water and sky gets lost in a silver haze. Deer graze on the banks of Lawlor Island, and the shadows of colossal container ships, floating ziggurats, drift on the blurry horizon.