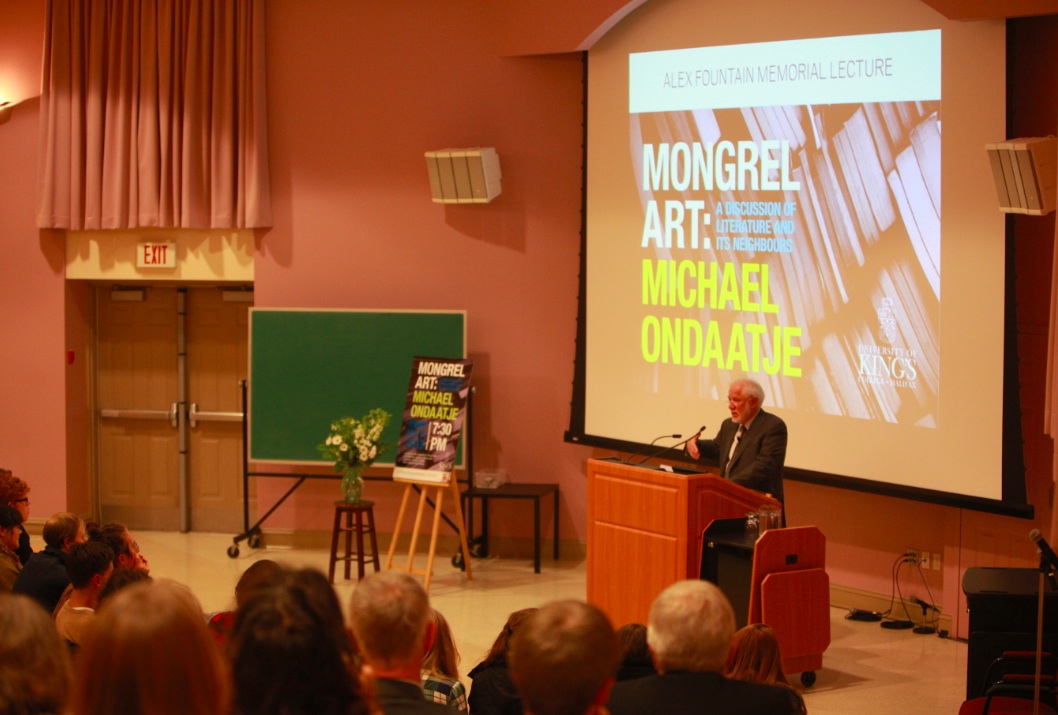 Ondaatje before a crowd on earnest listeners (Photo by Kerry Delorey)

Award-winning author Michael Ondaatje presented this year’s Alex Fountain Memorial Lecture, “Mongrel Art: A Discussion of Literature and its Neighbours,” on Nov. 14 at the University of King’s College.

The father of former King’s student Alex Fountain spoke briefly about his late son, who valued inclusiveness above all else. Fountain said the goal with his lecture series is to provide as many students as possible with speakers who will enrich their education.

Ondaatje, who grew up in Sri Lanka, said his formative years impacted him.

“I was surrounded by an oral transition rather than a literary one: gossip, lies and arguments at the dinner table. In Sri Lanka a well-told lie is worth a thousand facts.”

This tradition of story-telling might seem like an explanation for the works Ondaatje has produced over the course of his career, but it is not the tradition he credits with his success.

“We are influenced not just by our geographic environment but also in the art that surrounds us,” he said.

Throughout the lecture he echoed this sentiment time and time again, concentrating on how important the art one consumes is to the art one creates. He told the room that “the books I read growing up in Sri Lanka were all about England. My parents danced to Fred Astaire and Ginger Rodgers.”

Ondaatje credits one person in particular with helping him make the transition from consumer to creator.

“When I was in university, I had an English teacher who saved me as an 18-year-old idiot.”

Ondaatje is a strong believer in learning from those who inspire you regardless of art form.

“I’m fascinated by how writers might learn from architects, painters, gardeners, set designers.”

One of Ondaatje’s many inspirations is jazz musician Ornette Coleman, who famously said, “the thing you play at the beginning is the territory, what follows is the adventure.” This is how Ondaatje approaches the creative process. He describes this as “the journey or process where an artist follows the brush.”

Near the end of his lecture, Ondaatje was asked if he feels he has matured as an author. He said no. The audience laughs, but he continues.

“Well, I don’t want you to think that one gets ‘better,’” he said. “One writes about different things. This book is about this part or that part of the world: a small story. I don’t really think about world issues but I am in the world so I suppose that has its effect.”