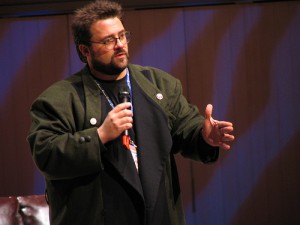 Smith in Toronto. Photo by Ian Muttoo via Flickr.

So when it was announced in late September that Smith would be coming on his first trip to Halifax for a solo engagement, tickets sold out in less than a day for his Spatz Theatre performance.

But the high school auditorium offered a pretty unusual atmosphere for Smith’s brand of comedy, especially considering most audience members were over the age of 30. Smith also chose to present the show as a Q&A as opposed to his recent tours, which consisted of him recording live podcasts.

The first question had to do with his favourite strains of marijuana. The director, who began experimenting with the drug in his late 30s, waxed poetically about its effect on his creativity, explaining how it has led him to create more content than ever before. But even though he openly discussed his positive experiences with drugs, he also stressed the negative impact hard drugs have had on his life, due to collaborator Jason Mewes’ longtime battle with heroin and OxyContin.

Things started to get looser when a comic fan asked a question regarding his interest in directing comic films, which transgressed into Smith dissecting his work as a filmmaker for almost an hour. This offered the best moments in the show, with Smith discussing everything from watching Richard Linklater’s Slacker for the first time, to his feelings on his recent films and the pitfalls of directing Cop Out. Smith captivated the audience, urging people to follow their dreams and take a chance on life.

What followed were some of the more awkward moments of the evening. One fan asked about seven different questions regarding Smith’s foray into podcasting, diverging into the questioner’s own experiences as a podcaster. At $60 a ticket, most people in attendance weren’t too pleased with the fan having his own conversation with the director. This led to a few audible groans from the crowd.

The show wrapped up with Smith discussing his promotion for his recent feature, Red State, and the Westboro Baptist Church that inspired it.

In the three-hour performance only five people were able to ask questions, mostly due to Smith’s tangents. But Smith promised a repeat visit to the Maritime town, complete with some of his podcast friends in tow.