The Swell Season delights at AFF 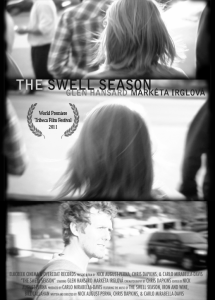 About three months ago, I read this NPR article about The Swell Season, a documentary about the Irish/Czech band of the same name. Now, I am, and have been for quite some time, an avid fan of the group; I collect their albums, I’ve seen them in concert — I even own the sheet music from their Oscar-winning feature-length film, Once. At risk of stating the obvious, let me just say I found the piece fairly intriguing.

Written by Linda Holmes, the article examines what the author refers to as “the discontented viewer.” According to Holmes, this figure has become commonplace in today’s society thanks to social media sites like Twitter, and the substantial increase in blogging. Basically, everyone’s a critic, and there’s nothing stopping them from sharing their complaints with the masses.

But wait, there’s more: Holmes goes on to argue that these critics are rarely dissatisfied with plot holes and bad hair; no, what really bothers them, what drives them to flood their followers’ news-feeds with scathing reviews, is the feeling that they’ve been “told the wrong story.”

And that’s where The Swell Season comes in. On paper, the duo (made up of ex-Frames frontman Glen Hansard and Czech singer Markéta Irglová) are the perfect love story: They begin writing music together at a young age, and then, as if overnight, they put out a film, fall in love, win an Oscar and are granted superstar status.

The Swell Season documentary picks up where Once left off. It shows us what happens when the reality of fame sinks in, and it’s too late to turn back. There’s a beautiful scene where Hansard tells a hypothetical story about a boy trying to kick a ball to the edge of his garden. Instead, it goes right over the fence. For the most part, he’s happy to have kicked it so far. But at the same time, there’s a small part of him who just wants his ball back.

Throughout the film, we are witness to this constant struggle between accepting fame – and everything that goes along with it – and longing for what used to be. This rings particularly true for Irglová, who was just 19 years old when their careers were taking off. While she no doubt feels blessed for their level of success, she also speaks candidly about her hatred of “celebrity bullshit,” and the overwhelming exhaustion that comes with life on the road.

And of course, there’s also the strain it puts on their relationship. By the end of the film, for reasons that remain somewhat unclear, their romance comes to an end. They don’t fall out of love; they don’t start hating each other. They’re just together, and then they’re not.

Holmes believes The Swell Season’s story wouldn’t succeed as a work of fiction because viewers would refuse to accept the ending. They would want something more, she says, an inkling that suggested the couple would get back together, if not today, then someday soon.

But this isn’t fiction; this is real life. And real life is messy, and complicated, and infinitely changing. This documentary captures all of life’s little complexities in its raw portrayal of two people who, despite their best efforts, just can’t make things work.