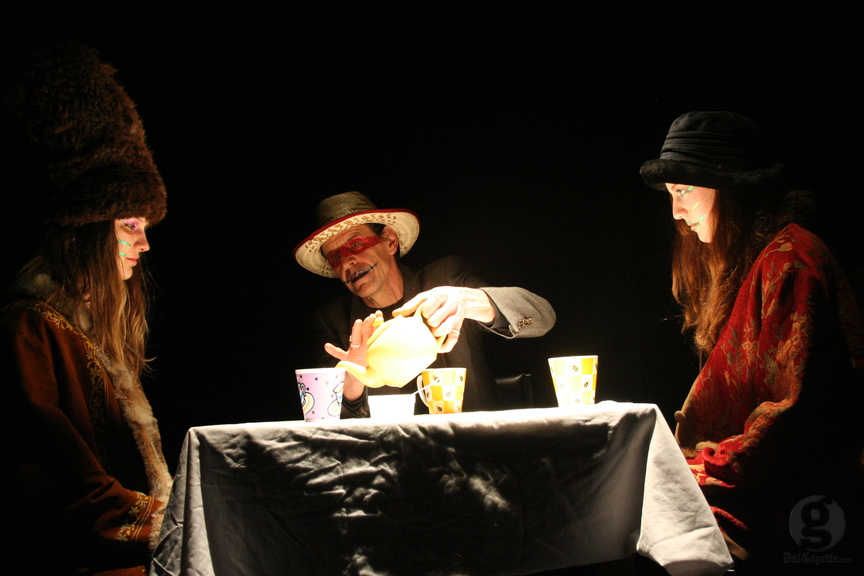 It was anything but normal.

A human-powered human cannon, a bicycle monologist and tea-sipping trapeze artists were just some of the oddities on spectacle for Circus of the Normal, Black Rabbit’s second annual arts fun—and fund—raiser.

Black Rabbit hosted the volunteer-driven event on Thursday, Feb. 28 at The Bus Stop Theatre. The non-circus event was to raise money for White Rabbit Open Air Arts Project and Festival. White Rabbit is an immersive weeklong artist residency that takes place in the summer at Red Clay Farm in Upper Economy, N.S. This will be the fifth year White Rabbit has brought artists together to explore their creative practice in a collaborative, outdoor, mentor-driven setting. The residency concludes with a festival where the public has the opportunity to interact with the artists and experience their work.

Circus of the Normal hosted 20 performances in all, with a volunteer crew of more than 50 people.

“It’s actually one of the most incredible experiences I’ve had in a long time,” said Laura Merdsoy, one of the non-circus’s more than 30 performers.

“Everyone is so fucking talented and, yeah, it’s crazy, everyone’s so great. I can’t believe it, I can’t stop blubbering about it.”

An instructor at the Halifax Circus by day, Merdsoy performed on the aerial silks on Thursday evening—contorting her body acrobatically around a pair of white, fabric lines dangling from the theatre’s ceiling.

“It’s really hard to describe the atmosphere that’s been happening in this space,” she said, reflecting on her involvement with Black Rabbit. “It felt like a community.”

“The everyday as extraordinary,” he said.

“It’s just so amazing to bring people together to share their talents and their ideas and their gifts and their energy in the middle of winter.”

“Coming to a circus at the end of February seems like a good way to stay warm and happy,” said the Halifax resident.

“It was sure fun to see so many people that I knew doing really crazy stuff that I wouldn’t normally see them do in their normal weekly life.”

Her favourite parts of the evening: Merdsoy on the aerial silks and the host, Rhys Bevan-John.

David Clark was also on hand for the performance with his 13-year-old son, Tallis.

“It was all wacky and weird,” said the elder Clark. His favourite act was the trapeze, which culminated in a face-painted, fedora-toting White Rabbit co-founder Tom Young diving headfirst through a paper spiral onto a bed of bubble wrap.

His son’s favourite was Bill Wood, a shirtless magician, whose comedic commentary and crafty rope tricks were a surefire crowd pleaser.

The circus non-circus also included an interactive component. Various costume-clad characters—including the wish-granting genie, the hooded time-keeping metro-gnome and the curiously accessory-less accessorizer—milled about before the show and during intermission to interact with spectators.

The event sold out, raising over $1,500 from admission and donations for the White Rabbit festival.

But beyond the fundraising and entertainment elements, event coordinator Brian Riley said Circus of Normal brought artist communities together.

“The architect who did this has never worked with the MC host or the magic act guy so now they’re hanging out backstage and are like, ‘Hey, now I know what you do,’ and ‘How can I integrate my thing into that right from the get-go?’” said Riley.

“How we can get a huge variety of communities together in one show and start sharing different artistic talents?”

This year Black Rabbit planned three days of events. Besides Thursday’s Circus of the Normal, a pop-up restaurant dinner hosted by Nina’s Backyard BBQ was organized for Friday and a community brunch on Saturday morning.

For more information on White Rabbit, check out www.whiterabbitarts.ca.