Why aren’t you playing: Guacamelee! 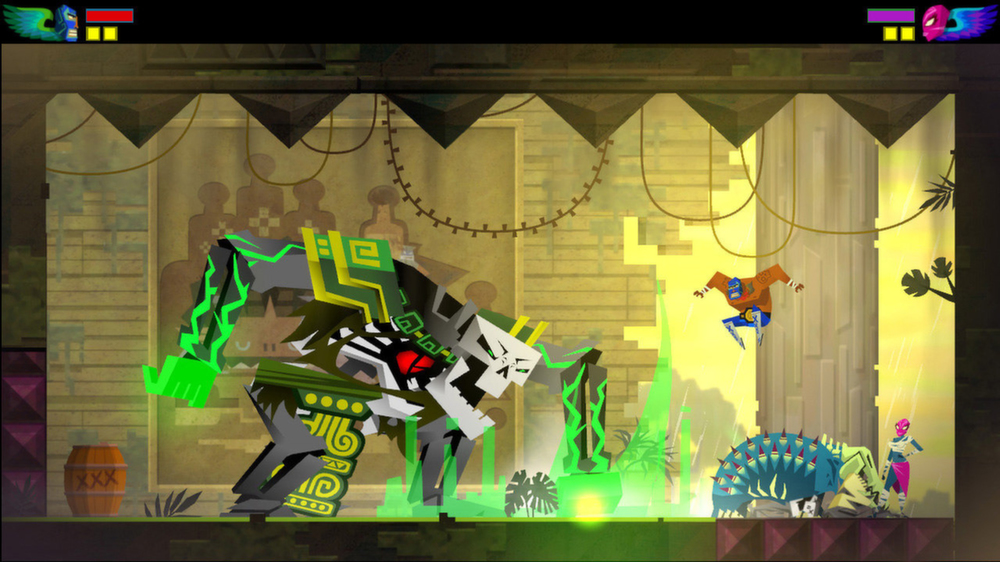 Is there anything cooler than a luchadore? No, there isn’t, and anyone who says otherwise doesn’t know what they’re talking about!

However, for those who do not know of the wonder that is the luchadore, I shall explain. Simply put, luchadores are Mexican wrestlers. They’re known for larger than life personalities, excellent showmanship and, of course, their masks. A luchadore, a good one at least, never reveals their true identity. They are like superheroes who do battle exclusively in the ring. Imagine growing up loving Spiderman, but he’s a big, awesome Mexican wrestler and instead of reading his comics you just get to go watch him fight super-villains in person.

Guacamelee! channels all that awesomeness, all the mythology of luchadore culture as well as a hefty dose of Central American culture, into an extremely polished and enjoyable game. A year old at this point, Guacamelee! shows no signs of slowing down, recently having been featured in the Humble Indie Bundle 11 alongside five other games.

The game has your character, Juan, rise from his humble rank of agave farmer (the plants responsible for tequila) to hero when, on Dia de los Muertos—the day of the dead—the dead actually rise. As skeletal hordes roam the lands, in a style harkening to the vibrant art of that holiday, you are tasked with stopping the evil undead Carlos Calaca.

The game is full of culture and life. Not only Central American culture, but game culture as well. Billboards in the towns you travel through will feature Castillo Crashers, or Megahombre vs El Masko Majoro. To gain new skills, you even have to destroy “Choozo” statues, harkening to the skill granting “Chozo” statues of the Metroid series, which is fitting because the game itself is a master class example of Metroidvania.

Metroidvania refers to any game that is open world and 2D/2.5D, often having areas of the world blocked off until certain tasks are completed or skills are learned. But unlike Metroid or Castlevania, you are learning wrestling moves and gaining powers like the ability to turn into a rooster or shift between the world of the dead and the world of the living.

Platforming grows gradually more difficult, and the combat is fair but challenging. The game never throws anything you shouldn’t be able to handle, but it will task you. Playing with a friend can be a real joy, as the game allows you to have one other player hop in as Tostada, a female wrestler and guardian of the magic luchadore mask Juan wears. This balances certain harder moments of combat out, but can make platforming a real chore sometimes.