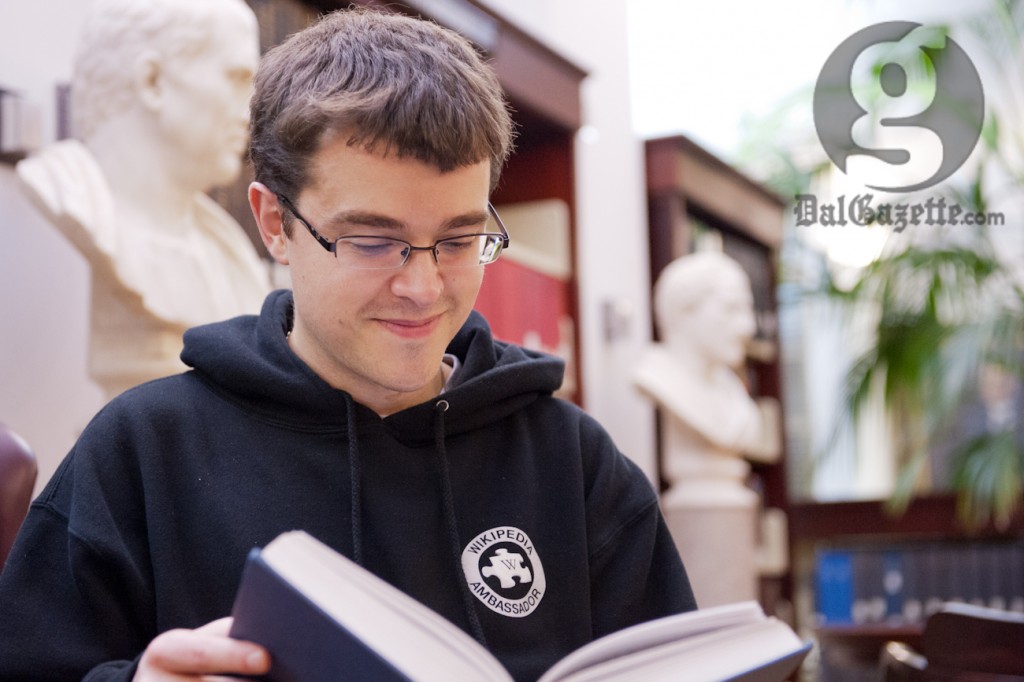 Like most great online discoveries, it was boredom that led David Purdy to Wikipedia back in 2006.

Six years later, of the 35 million registered Wikipedia users the world over, fewer than 50 have created more articles. Purdy has more than 4,500 individual articles and 130,000 edits to his name.

Purdy was on an engineering work term in Calgary, Alta., when he first came across ‘the free encyclopedia.’

“It was the peak of the oil boom and there were drive-by hirings,” he says. “My supervisor was constantly getting promoted and being replaced by someone else … no one really cared about the work term student.

“At the point where I was really bored out of my mind and could not find any work for anyone to give me to do, I discovered Wikipedia.”

Purdy is a short, well-spoken man in his mid-20s, with a kind face, a brisk walk and an easy laugh. His hair is dark and cut short, and he wears a deep blue hoody with a small logo that reads “Wikipedia Ambassador.”

“When [engineers] look at something they want to know how it works. When I look at things I’m more interested in the etymology of the words used to describe the thing or the history of the thing.”

After four years of engineering at Memorial University he transferred into English literature.

He then earned an M.A. in literature from Acadia University, and now teaches the history of science and technology tutorial at the University of King’s College.

An educator himself, Purdy says, “A lot of my dedication to Wikipedia comes from a belief that people should have access to all human knowledge.”

Interestingly, Purdy explains that Wikipedia’s goal isn’t to present truth. Rather, “Wikipedia aims to present all views on a subject.” But not equally, he’s quick to add: “They’re supposed to be presented proportionally.”

“It’s really how society works,” he explains. “We trust that the things that we know are true because that’s what our society has decided is true. I think if we trust our society it would be inconsistent not to trust Wikipedia because Wikipedia is simply a better version of society. The way that we collectively decide what is accurate and what information is right, Wikipedia does on a much more efficient and fundamental level.”

Launched in 2001, Wikipedia is a collaboratively edited, online encyclopedia. Changes are instantly updated and any user is able to make edits to the more than 23 million articles.

Purdy is one of a few hundred senior editors on Wikipedia known as administrators. The administrators’ symbol is a mop, for two reasons. Firstly because of the extra tools they have to “clean up things that most people can’t clean up”—for example, deleting or moving articles, or editing locked pages.

“But also [the mop] is to keep us humble,” says Purdy. “The big quotation about administrators by [Wikipedia co-founder] Jim Wales is that ‘It’s not a big deal.’ And really it isn’t.”

Purdy estimates he spends a couple of hours every day editing on Wikipedia. And he hasn’t earned a cent for it.

“That’s very important,” says Purdy. “If Wikipedia editors started getting paid then that would create an immediate bias.”

But there are alternative rewards. Editors can give their peers “barnstars” in recognition of especially commendable activity. One of Purdy’s proudest moments was being presented a “barnstar of civility” following an editorial disagreement that was resolved in a particularly courteous and respectful manner.

Besides editing, Purdy has also been volunteering his time with the Ambassador Project, which aims to bring Wikipedia into universities and colleges and allow students to publish their final papers onto Wikipedia. That way, instead of “being tossed in the garbage can or stacked away in some box,” student work is “forever out there for people to benefit from.”

“I’m convinced we’re going to see a considerable turnaround in how Wikipedia is viewed within academia.”

That’s one of the reasons he’s stuck with Wikipedia.

“I spent months and months writing my theses,” says Purdy. “And I’m very pleased with them, but maybe six people read them. Maybe. And it’s unlikely that anyone else ever will. But as soon as I create a Wikipedia article several people read it. And if I get it up on the main page at least hundreds of people will read it, most likely thousands.

“I feel like I’m doing a much better service to the world and even to academia simply by writing on Wikipedia.”

As for the future, Purdy has no plans on slowing down.

“If I can spend my time making enough money through my job in order to finance my time editing Wikipedia, then that’s quite worth it to me.”