Breaking down “paying for school for millionaires”

Finding the facts on Dal's MIT team beyond the twitterverse.

Dalhousie University announced on Aug. 10th that $300,000 has been given in funding for nine participants to attend the MIT Regional Entrepreneurship Accelerator Program, which has caused a backlash among students.

The Dalhousie Student Union and students are claiming that Dalhousie funded a program with money that could have been used on students, and have echoed the phrase “paying for school for millionaires”.

Students have protested that Dalhousie University and the Government of Nova Scotia, have sat idly by while tuition prices increase and students bear the burden.

Matthew Hebb, Assistant Vice President Government Relations & Economic Development for Dalhousie, says that the funding will come exclusively from the private sector partners of the program.

“The university has received enthusiastic interest from private sector partners, who will fund the entire program fee. The provincial and federal governments are not helping to fund the program fee, however, they are very supportive and are participating in the process.”

But Amina Abawajy, VP Academic of the DSU, states that this funding should have been put forward projects that the DSU have created, such as continuing funding for the Dalhousie Sexual Harassment phone line.

“The university has refused to adequately fund the phone line,” Abawajy said.  “This refusal and the prioritization of the elite over students demonstrates how the administration continues to ignore students’ needs.”

In a 2015 interview with the Dalhousie Gazette, then DSU VP External Kaitlynne Lowe stated that the university had discussed with the DSU that there would a be review in April 2016 to ensure that the funding given to the phone line was being properly used.

The DSU at the time was also working on receiving funding from provincial grants, and was also trying to secure private sector partners and partners on campus for funds.

It is unclear what discussions have taken place between then and now. When asked if there was ever a time that the university told the DSU that the funds may not always be there, Abawajy said: “The executive members of the Dalhousie Student Union and the Phone Line Coordinator met with administration to present a funding proposal for the continuation of the phone line,” and that inadequate funding was given after that.

The university, however, maintains that the funding for this program did not come from funding streams of Dalhousie, but was funded by the private sector. The university expects that after having members go through this program they will bring a positive impact to Nova Scotia, also stating that team members are covering their own costs for travel within the program.

“Those who agreed to participate on the core team are volunteering their time to help develop a Nova Scotia innovation strategy, working with the advice of the world’s best at MIT” said Hebb.

According to the MIT REAP program’s website, the initiative of this program is “to help regions accelerate economic growth and job creation through innovation-driven entrepreneurship (IDE).” The program requires a “champion” from each sector of “academia, industry, government, risk capital and entrepreneurial community.” 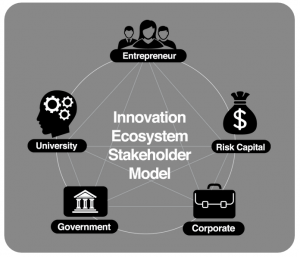 Model of teams for MIT REAP.

The criteria of which a member can be selected is extensive, the website stating “stakeholders should be decision-makers of executive level, and have the ability to influence the creation of policy and programs in their own sector, and they should bring an intimate understanding of the current ecosystem and its challenges from their perspectives.”

Also citing that “with participation comes responsibility. Each team member will take on the responsibility of being a Sector Chief, responsible for representing the interests of their sector, identifying opportunities, and working to build support in their sector to execute on various elements of their regional REAP strategy.”

One of the members on Nova Scotia’s team, which is the only team from Canada participating, is John Risley.

John Risley’s name was most recently news on campus for having donated $25 million for a new Ocean Frontier institute, which will be a headquarters for marine research, to Dalhousie. Risley was also being interviewed by The Coast, for allegedly purchasing a privatized student loans business in the US.

While the accuracy of the statement that Dalhousie is “paying for school for millionaires” seems fallible, it is true that in Nova Scotia, many graduates from the province and those from outside, come out of school with an average student debt $35,703.

On Sept. 19, university students at King’s College, now under the administration of Dalhousie, will be holding their own protests of rising tuition fees.