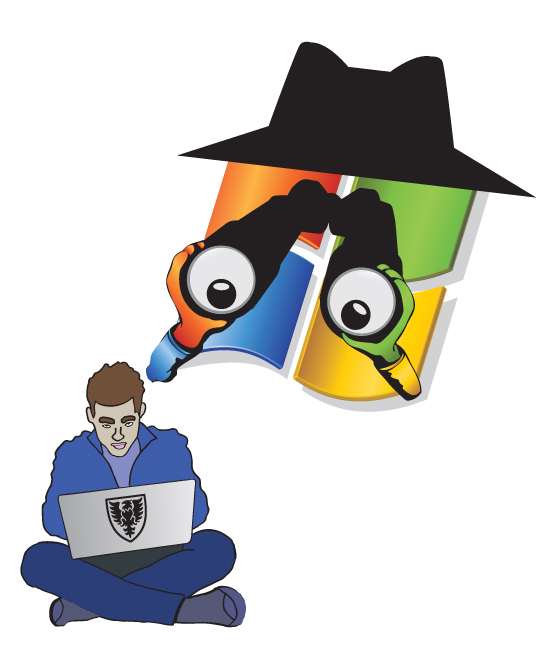 Fluffy and white, floating weightlessly: that’s the image of ‘the cloud’ sold by the sun-drenched complexes of Silicon Valley.

After years of deliberation, Dalhousie is opting in. But the outlook may be gloomier in Halifax.

On Sept. 4, the university began the rollout of its new email, calendar and productivity platform: Microsoft’s Office 365. By the end of the academic year, the vast majority of Dal’s 60,000 email accounts will be hosted off-campus, somewhere in Microsoft’s array of data centres, located nowhere precisely but accessible everywhere.

Into the clouds
“We are rolling out a modern email communications tool, that’s much like what consumers can get,” says Dwight Fischer, Dal’s chief information officer, “for free.”

The new myDal site offers students more storage space, a new calendar system and extensive support for mobile devices. Students will also get access to a limited version of Microsoft’s office suite. By phasing out the old system, the university hopes to save around $1.8 million over three years.

As of Sept. 13, the university has moved over roughly half of its users to the new system. There have been some bumps along the way: faculty have not been transferred over yet, and Ficher says that the new calendar system has been somewhat problematic.

While Microsoft has described Dal’s move to Office 365 as “one of the more significant deployments” of their software, some of the largest public institutions across Canada have already outsourced IT services to cloud-based alternatives.

“We are not the first school to do this,” says Fischer. “This is a big trend in higher education. This is the direction the industry is taking us.”

Cloud reading
Dal has been planning to move away from locally hosted email and calendar services since at least 2011. But now, some are calling for the university to review its decision in light of a series of revelations suggesting that Microsoft is providing America’s National Security Agency (NSA) virtually unfettered access to the data it holds.

If these allegations are true, faculty and student’s emails and online documents would be readily accessible to prying eyes. And although Nova Scotia law requires the company to notify Dal if it receives a request for data, this may not be a credible promise.

“I think there are exceptions to it,” says Fischer. “Everyone is learning that [Microsoft] have been required to comply with some of those requests.”

Despite this, Fischer says concerns about surveillance are misplaced. “It’s a red herring.”

“The way people are using email today, the risk of being monitored by the NSA or the U.S. government is there—but it’s already there for all of us,” he says.

“Forget where it’s hosted for a minute, the plain security of the system—a modern system, by Microsoft, with their army of security experts, is much more secure.”

But not everyone is at ease. The Dalhousie Faculty Association (DFA), the union representing academic staff at the university, is concerned by the privacy and security of the new system.

Kevin Grundy is the president of the DFA.

“I don’t think anybody—or at least, I hope not—is under any illusions. There’s always the possibility of a second pair of eyeballs on our material. Anyone who thought that wasn’t possible was probably somewhat naïve,” says Grundy.

”But we felt relatively secure when email was held on Dal servers. We recognize that is completely gone on the cloud services.”

The DFA is looking to move the union’s accounts off of Dal’s IT system.

Gone phishing
Information Technology Services (ITS) is less worried about state surveillance than one of the most common threats on the net: phishing.

John Bullock is the information security manager for ITS. He says spam is “the biggest issue facing us as IT providers right now, and as individuals.”

An attempted phish can range from the absurd (Nigerian prince) to relatedly elaborate (fraudulent Dal pages). Most recently, an email disguised as being from Dal Security was circulated amongst students.

“The days of you being able to tell it’s a scam? They’re over. The lack of tells”—a request for your password, poor grammar, or a foreign address—“doesn’t make it a valid email.”

Bullock says that university email accounts are targeted because they have traditionally had very robust internet connections. “The accounts could be used to send out a lot of spam. They also have the weight of authority.”

ITS doesn’t know who, exactly, is targeting Dal. “What we know is that it’s people making money,” he says.

Unfortunately, the move to Microsoft has, at least for the time being, weakened the school’s defences against spam. “There is a bit more spam now. We had pretty robust spam filters here at Dalhousie,” says Bullock.

Office 365 has a spam filter, but Microsoft told ITS that their system needs time to ‘learn’ before it is fully effective. “We hope it’s going to go away,” says Bullock, “but initially it did go up.”

Farewell to email
Despite security revelations, there’s no thought of backing out of the deal with Microsoft and building up Dal’s capacity.

“Even if we said, ‘um, yeah, we’re concerned about that’ and we put in a few million dollars, we would never keep pace with the rapid changes in technology today,” says Fischer. “It would give you a sliver of the capacity, and we would be spending millions of dollars we didn’t have to for that false sense of security.”

Fisher rattles off a list of problems: people connect over insecure wifi, email travels all over the world and you cannot tell where it is going.

“Say ‘if I have to communicate a sensitive file?’ We say, ‘don’t use email.’ If I have to send a letter about a student on probation, I won’t send it over email. We have a secure file transfer system on our network.”

And then there’s money.

“Why would the university spend millions of dollars when funds are so tight?,” says Fischer. “That’s an irresponsible use of student fees for a false sense of security.” 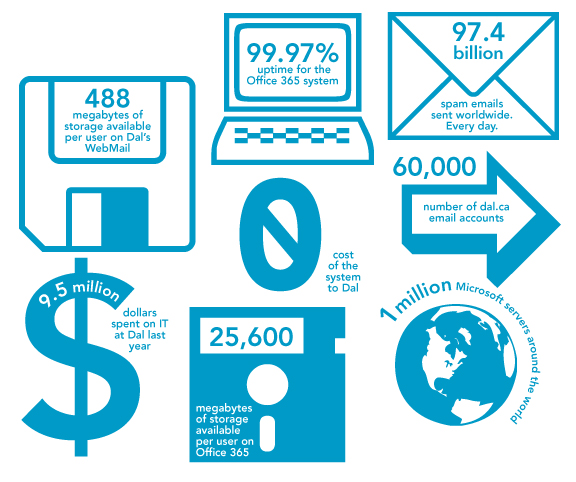