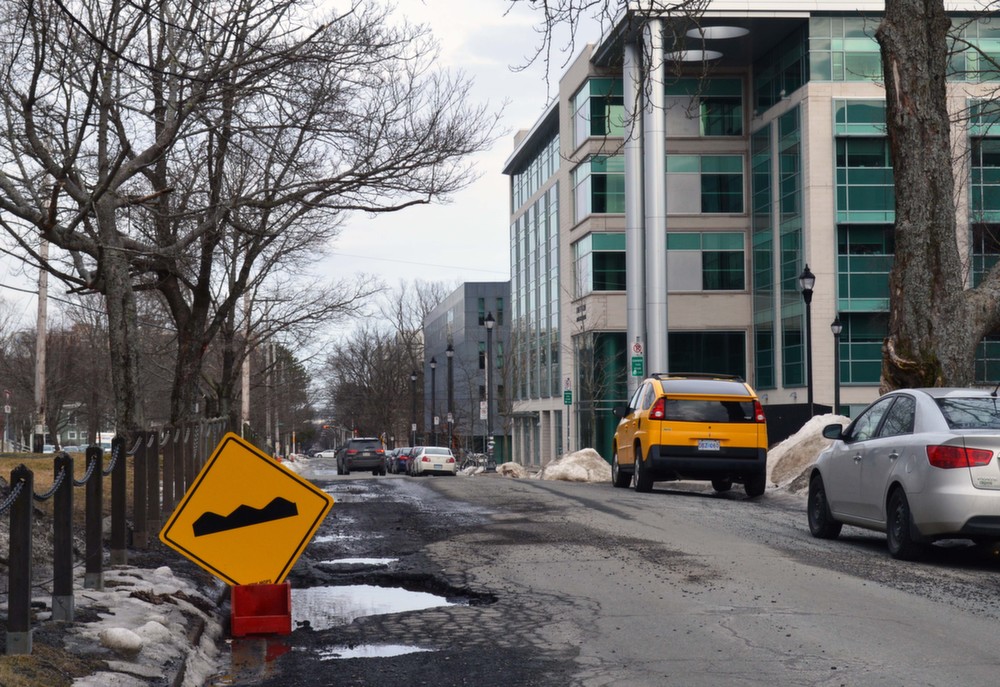 Is this pothole the back door to Narnia? (Photo by Kristie Smith)

In front of the Student Union Building, a 150-centimetre wide pothole lies on the right side of University Avenue.

Yet the pothole is only about three centimetres deep, making it a non-priority pothole for Halifax Regional Municipality (HRM). The city’s website says priority potholes on main roads, such as University Avenue, must have a depth of eight centimetres or more. Only then, “as resources permit,” could the pothole be filled within seven days.

The pores of aging asphalt increase in size, making it easier for precipitation to get in. In cold weather, the precipitation freezes and expands, warping the pavement. When the temperature rises, the frozen precipitation base melts and the pavement collapses. As vehicles drive over the baseless pavement, the pressure forces the pavement to collapse, creating a pothole.

The majority of potholes on Dalhousie campus are on University Avenue and LeMarchant Street. The potholes range from two to eight centimetres deep. Potholes less than three centimetres deep don’t even get scheduled for maintenance because they are not an “immediate hazard,” according to the HRM website.

The city has an open work order to repair the potholes at the University and LeMarchant intersection, as well as in that proximity. The work should start once weather conditions improve and the resources are available.

“We have gotten one or two complaints in relation to potholes in some of our parking lots from time to time,” says Burns, “but I don’t believe there’s been any serious damage.”

Potholes don’t often get patched during the winter because it’s likely that rain or melting snow will seep back into the asphalt, creating another pothole. “Traditionally, you would see greater amounts of patching in the spring,” Bryson said, “but we have our own kind of mobile box that we can patch.”

The mobile boxes contain hot asphalt to cover up the pothole. Cold asphalt isn’t as stable an alternative as hot asphalt because it is easier to rip up when a vehicle drives over it. The Dalplex potholes have been filled in many times with cold asphalt or gravel, but as soon as a snowplow runs over the filled potholes, it rips up the filler.

“The only way to keep ahead of it is to get maintenance done in summer and fall,” says Burns.

Burns encourages drivers to slow down if they see a pothole to reduce damage to their car. They should then report the pothole to the HRM customer service line.

“It may not help you out if you hit it,” says Burns, “but it certainly will help with people the next day who go by so that the city can fix it.”