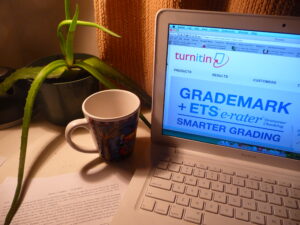 For many students, it’s a dream come true. But for many staff, it’s a nightmare. Dalhousie walked away from renewing its contract with Turnitin, a plagiarism-checking service, after claiming the company had broken the trust factor.

Dwight Fischer, assistant VP of Information Technology Services at Dalhousie, made the final decision at the 11th hour on August 31 as the contract ended, sparking much controversy.

“We knew we had an issue in June. We have colleagues across Canada who use the service as well and we found out some things about how the company was operating that we questioned,” says Fischer. “We found some elements of our relationship with them that led us to believe that the trust factor was less than we assumed it to be.”

“That is not the issue though,” says Fischer. “We are moving in that direction anyways. It’s not because [Turnitin] was storing stuff in the States. It has to do with the integrity of our process with the contract.”

According to Fischer, only 29 of the faculty members at Dalhousie were using Turnitin to begin with, mostly in the Faculty of Arts and Social Sciences.

He says they threw them a bit of a curve ball by walking away from the $20,000 Turnitin contract, but suggests that there are still alternatives to check for plagiarism for the time being.

“Faculty can just take segments of papers and Google them. You’ll find out rather quickly where stuff is, if it looks suspect,” he says. However, the time involved to Google each segment of an essay would put a lot of pressure on faculty, and would likely prove to be far less effective than a Turnitin substitute.

“I don’t think it will have that much of an effect on students,” says Nick Little, a third-year neuroscience student.

“I think it will be a hell of a lot more difficult for [professors] to determine whether it’s plagiarism from other sources.”

Still, Dalhousie’s official line is that it is looking for alternatives. Fischer says that Blackboard, a learning management system, is being looked at very closely. However, even Blackboard fails to compare to the much larger Turnitin database.

Chris Saulnier, president of the DSU, says that we should take this time to reignite the conversation on whether a plagiarism checking service is the right direction. For years, faculty and staff have taken issue with Turnitin, due to the loss of intellectual property and copyright issues.

“Students don’t get to keep their work as their intellectual property that they produce in their degrees,” he says.

“What’s the message we are sending our students? The message is that we have an academic integrity policy and you see it on every syllabus. Everybody is still accountable to this.”