Christian residence only option for some U of T women 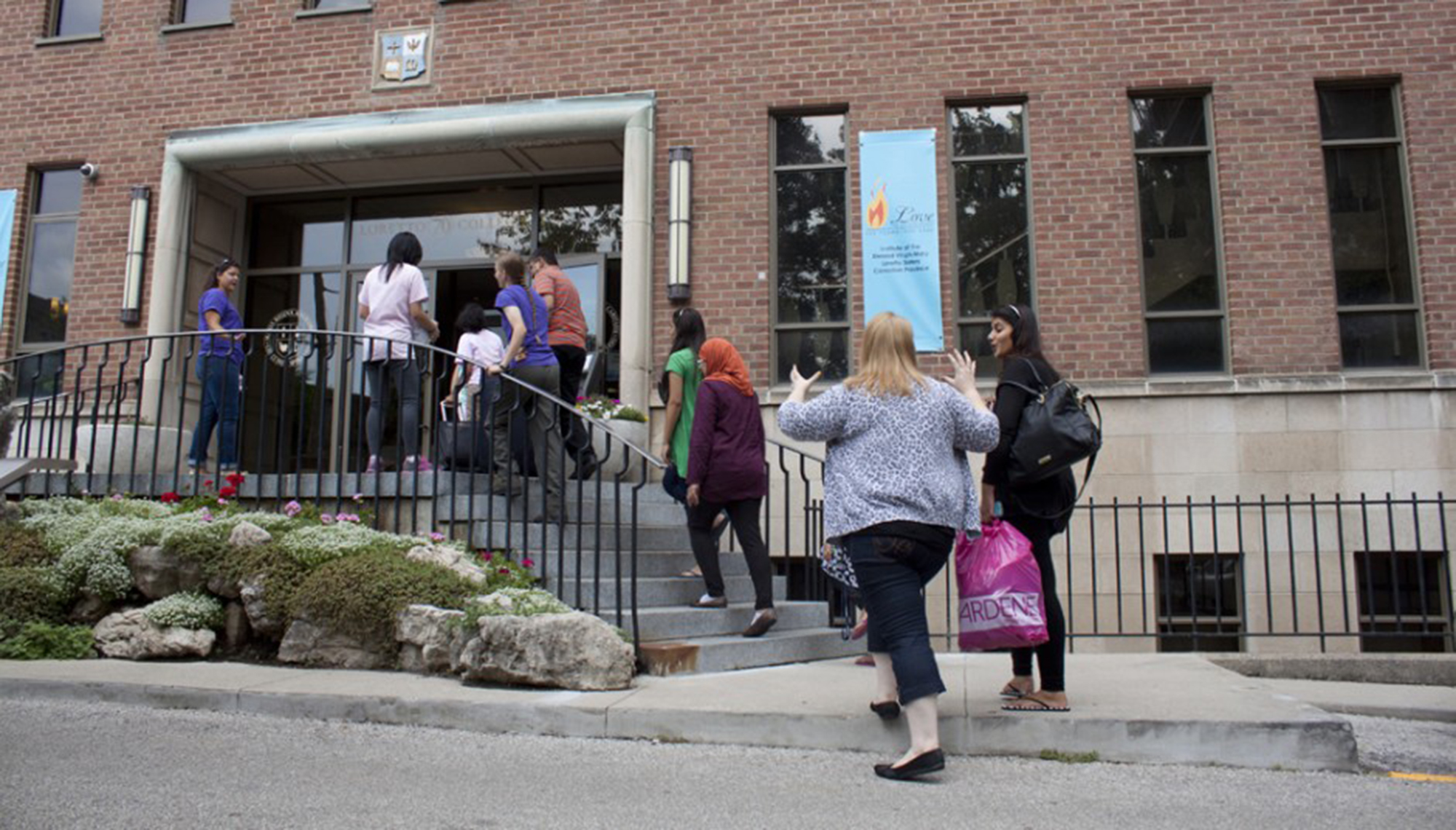 Students and parents at Loretto on moving day (photo by Carolyn Levett, The Varsity)

Editor’s note: This article was updated on Sept. 10, 2019, to exclude a source’s last name at her request.

TORONTO (NUW) – The year she graduated from high school, Emma Sexton was accepted into the engineering program at the University of Toronto with the usual residence guarantee. She grew up in a small town in the Niagara region and knew little about what to expect in terms of residence or Toronto life. Excited about living at her school of choice, Sexton applied to the New College and University College, and didn’t think any more about her residence options for several months.

Sexton received several emails saying she would hear about residency in late June, but the date came and went without a residence offer. Finally, six days before the payment deadline, she was offered space at Loretto College, a private, all-female residence affiliated with St. Michael’s College. Sexton says she was disappointed about being put in Loretto, but took the spot because she was not offered an alternative.

After moving into Loretto, Sexton quickly learned it was not like other U of T residences. In the Loretto residence agreement, the philosophy statement reads: “Life at Loretto College focuses on participation and involvement in a supportive Christian academic community.” The agreement goes on to state that the College has the right to make policies that “implement the philosophy of the College,” but that discrimination will not be tolerated. Students are required to sign the agreement, agreeing to “adhere” to the college’s philosophy.

Over the past three months, The Varsity spoke with more than 15 current and former Loretto students. Although their experiences differed, many of them expressed discomfort with the college’s unique policies and residence life.

Sexton described an experience when she signed out a male guest two minutes after curfew, and the porter said to her: “I signed you out at 10:00—otherwise they talk.” Sexton recalled that this experience made her feel strange. “I assumed ‘they’ were the staff. It made me uncomfortable that I was going to be perceived differently because of two minutes,” she said.

Many students took issue with the restrictions on when men can visit. The 2012 residence agreement states that male visitors are not permitted in residence rooms between Monday and Wednesday and are only allowed during certain hours on other days.

“The fact that there were male visiting hours really bothered me,” said Caitlin Scinocca, another student who did not apply to live at Loretto. “If I’m paying good money for a room, at least let my friends come hang out during frosh week, or let my dad up to the room.”

Julia Kemp, an exchange student, feels the policy is too restrictive.

“I understand that U of T needs a space where it is all-girls due to demand and religious reasons. However, if I have a single room I see no reason whatsoever why I should not be allowed a male in my room,” she said, adding that she “felt like she was treated like a girl in a boarding school.”

Another student, who lived in Loretto for two years and requested anonymity, said these regulations are “ostensibly in accordance with Catholic doctrine to discourage any kind of fornication. Nobody really knows why, and I’ve never gotten a straight answer. That is all fine and dandy—unless, of course, you aren’t Catholic.”

A number of students reported that, like Sexton, they were offered residence at Loretto without alternate residence.

Elizabeth, a second-year engineering student, declined Loretto’s offer because she felt uncomfortable with the residence agreement. She found off-campus housing on her own.

“I wanted to live in residence, I just didn’t want to live in a residence so different from my idea of what university should be,” she said.

U of T guarantees a residence offer to every full-time, first-year undergraduate student.

Michael Kurts, U of T’s assistant vice-president of strategic communications and marketing, stated the university’s housing policy does not guarantee students a place in their first choice of residence.

Kurts added that Loretto welcomes students of any or no religion, despite what he described as its “religious roots.”

Angela Convertini, dean of women at Loretto College, was surprised to hear that students were given the choice between a place at Loretto or no residence spot at all. She claimed that all students are offered a choice between St. Mike’s and Loretto, and that everyone who lives in Loretto does so by choice.

All women spoken to for this story who did not apply to Loretto claimed Loretto was presented as their only option.

Convertini stated that students apply to live at Loretto, and if there are still spots left after the application process they inform U of T housing, who then fills the spaces.

“We would never think that someone was forced into living at Loretto,” she said. “We send them the actual residence agreement, they have a choice—they can go to a co-ed, they can go to us. We really believe that the people who come here enjoy themselves,” she said.

Shams Al Obaidi, a third-year don at Loretto College, feels the tight-knit sorority atmosphere was an important part of her university experience.

With a community of around 130 students, Loretto allows residents to get to know each other on a more personal level, according to Al Obaidi.

Loretto welcomes all kinds of people from distinct backgrounds and religions. For example, Al Obaidi recalls a time when a sister asked her to attend the college’s weekly masses despite being of a different religion, because “all are welcome.”

Al Obaidi also believes that Loretto College’s male policy is not unduly restrictive. She said  that men are able to visit the main floor and lower lounge at any time, and that the restrictions on male visitors are “more of a courtesy to others” than anything else.

Convertini stressed the residence tries to be inclusive of everyone.

“We like to think that U of T provides a whole continuum of residence experiences for its students and we’re just one of the choices students have,” she explained. “While we’re a traditional Catholic dorm, we’ve had Jewish girls, Protestant girls, Muslim girls—girls from every faith, and it’s a very welcoming environment,” she said.

– With files from Madeleine Taylor